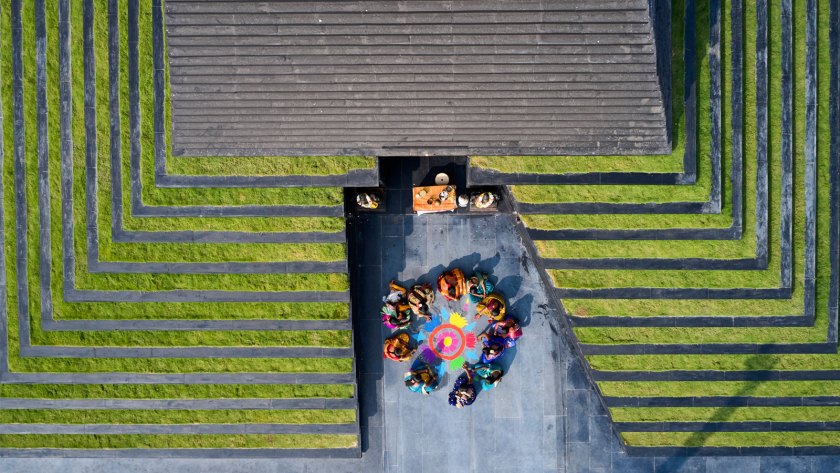 16/08/2021 kokum .co Architecture and Urban Design, Culture Comments Off on TEMPLE OF STEPS

Temple of Steps is part landscape and part building, harmonized through the module of single corbel creating a scale that is both intimate and distinct for the village of Nandyal in Andhra Pradesh.

The brief was to design a temple for the residents of villages around Nandyal. In the dry terrain of Nandyal, the main concern was to provide a space which would marry the socio-cultural expectations of a temple with the ecological framework and dynamics of and around the site. The immediate context of cotton and chilly farms in the region were fed by a natural canal system which had dried up.  The ecological strategy for the temple, thus began with recharging the groundwater.

The planning of the temple itself was based on a 10th century temple for the same deity at Tirupati in Southern India and similarly includes the Balaji & Varahaswamy shrines and a Pushkarini (water tank).

The construction process uses locally available black limestone slabs corbelled to form the main body of the temple. The same corbelled profile also incorporates soil and planting in the lower half of the temple body to buffer against the heat and finally this stone corbelling turns into  a ghat i.e the steps that access the water.

When STIR spoke with Sameep Padora on the project, he said “Water is the most significant element to the project. We could and did design a temple –  but to remediate an ecology now that is something that is beyond the scope of the project and ideally it should not be. We feel we are at a point where, both in terms of ecology and resources, the value of water, and other resources should not be of  just  metaphorical or sceptical consideration. The more we start looking into all resources and their ecologies we’d be able to create more sensitive environments. Ideally, every project should respect its context, whether it is a temple, house, community centre, school etc.  The base program has always been important so that you can investigate and project it to the extent that you do but the layers that you can add creates additional value beyond the fulfilling  of the program itself. And we think that is critical, how do you do ‘more with less’?”

The ecological strategy for the temple began with recharging the groundwater. Water overflow from the limestone quarries was led to a low-lying recharge pit or ‘kund’: the banks of which was imagined as a social space, in the manner of a traditional ghat ; a flight of steps leading down to a waterbody. This negotiation of land and water with steps is a significant part of India’s architectural heritage as is seen in the kunds (water tanks) within temple precincts. The water infrastructure is able to harvest roughly 1370000 litres of water.

A link to the STIR article.

As a practice, we at sP+a believe that India’s vast breadth of socio-cultural environments requires multifarious means of engaging with the country’s varying contexts. Type, Program, Design and Building processes are subservient to the immediacy of each project’s unique frame of reference. Our practice questions the nostalgia involved with the static ‘museumification’ of craft and tradition as well as the nature of what today comprises the ‘regional’ in contexts amplified by their place in global and regional networks. This attitude enables the practice to look at traditional project types, projecting their formal/relational history within the paradigms of current socio-economic forces.

The studio structure actively engages with research, collaborations and collective models of practice not as isolated individual formats but as symbiotic streams feeding into each other. We advocate this hybrid model as an alternative to the traditional architectural practice, believing that this enables us to respond to the specificity of the local by evolving methodologies of extreme subjectivity.