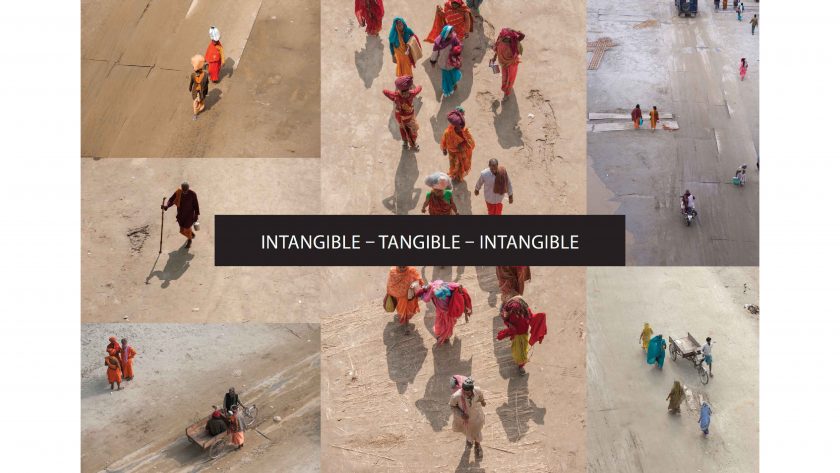 08/09/2020 kokum .co Communication Design, Culture Comments Off on BEING IN IT AND BEING OF IT

With most things cultural, if not all; we feel that the role of the designer is to almost always communicate something intangible.

‘Being in it and being of it’ is a compendium documenting conversations, experiences and observations from the Kumbh Mela of Allahabad 2013 (8 Volumes – Published) and Nashik-Trimbakeshwar 2015 (4 volumes – To be Published). Two documentaries of the respective Kumbh Melas have also been produced to support the documentation.

Although there exists a large volume of visual as well as literary text, documenting and describing the Kumbh Mela, a lot of it is either scholarly and inaccessible or personal, at times biased and more often than not, attractive but exotic. The intentional or unintentional omission of context leads to an exoticism which distances the audience from the essence of the content. This leaves a vast number of interested and educable people without a means to an informed yet engaging overview of this culturally, historically and spiritually landmark event. Although difficult to describe within the constraints of language, an ‘Indian’ perspective is essential for and imperative to such an undertaking.

There may be a few grains of truth in all that people have been conditioned to think about or view the Kumbh Mela as (often negatively), but the mountains of purity, spirituality and the very essence of this faith-gathering cannot be repudiated and dismissed. The attempt through this undertaking is to capture the essence of the Kumbh Mela by creating an unbiased, experiential and communicative narrative which seeks to invite people to come and experience the Kumbh for themselves. This documentation provides a comprehensive overview of this landmark event by distilling valuable information and thoughts gathered from 275 conversations on-field of people experiencing the Kumbh from different gamuts of life in real time and contributing to the landscape with the roles they played. These conversations form the ‘voices’ that drive the narrative of the books and films. Data of religious and spiritual significance gathered from saints and sages complemented by practical and logistical facts gathered from organisational personnel and academicians alongside an honest and clear rendering of collected anecdotes and experiences of the meal attendees forms this body of work. The depiction of the Kumbh in most of the documentation available is that of scale which of course is integral and also what makes it what it is. However, the attempt for us was to learn more about the individuals that formed the collective in these landscapes.

The team spent about 15 weeks across three Kumbh landscapes to produce this documentation. Each of the produced volumes begins with an introduction to the voices situated within the particular volume. The reader can attribute authenticity to these for the role they play in the landscape thus helping enable the Kumbh unfold in the way it does.

Making of the books | Emergence and Self organisation are two words that best describe the journey of this documentation in hindsight. Through it all, we saw our role as anchors and facilitators (not directors and authors). We adhered to an approach of an oral historian in our on-field documentation. Our role was to be most receptive to the encounters on-field. The mode of enquiry was simply conversations and observations. Textual evidence can be rooted in conversations (recorded and archived) and visual evidence can be attributed to observations (filmed and photographed). Diligent note taking and everyday logging of footage, images and data was integral to the on-field stint. The books are purely based on primary research and therefore the entire diary log on-field forms the bibliography of the books.

Allahabad Kumbh 2013
Every on-field conversation was tagged for various categories that emerged from it based on all that was spoken of by a particular individual about the Kumbh. These tags were then grouped until about 24 categories emerged. They were further aggregated until 8 groups (each a trilogy) was formed resulting in an 8 volume compendium.

8 styles of writing have been developed from the available content (both textual and visual) that make its way into each of the 8 books. Some of these are Essays in the form of introductions to each book, poetic verses, photo stories, character stories, diary notes, insights, interviews retained in a Q&A format and so on.

Nashik- Trimabkeshwar Kumbh 2015
The Nashik- Trimbakeshwar Kumbh 2015 documentation is yet to be printed and published. It has been classified into three underlying themes that distinctively emerge within the Kumbh landscape. These translate into four individual volumes titled as:
Faith in Worship (I & II)
Duty in Work (III)
Purpose in Action (IV)

A distinct visual language is developed which reflects implicitly on the text heavy pages through subtle graphics and more explicitly on page breakers that bear illustrations and patterns. These subscribe to a larger visual language incepted for the compilation. With the intent of amplifying the visual experience, the system adopted in the book is born out of dissection of the ‘tangible visual glossary’ and the ‘intangible sentiments’ into proper, common and abstract nouns. Photographs correspond to proper nouns, a bank of vectorised illustrations represent common nouns and derived symbolic abstract patterns correspond to abstract nouns. This summarises the genesis of the visual design language of the Nashik Kumbh books.

*The images provided of the Nashik Documentation in this article are from the dummy draft of the books which are yet to be published. Extraction and circulation of these images beyond the article is not permitted.

For us, the journey as communicators has been about immersing to understand the intangible to then make the tangible documentation (be it a book or a poster or a film) with the aspiration to evoke the intangible. What the documentation might evoke or elicit will be different for all – but it must ‘evoke’. The cultural value of doing this is to get a glimpse into various worldviews, philosophies, lifestyles and the power of collective consciousness. Access to such documentation has the potential of striking chords which may help in meaning-making and finding purpose. Aside from this, all that emerges physically in this temporal landscape in terms of scale, management, the intent to serve has lots to offer to learn from. The entry points into this landscape are several.

Anugraha is a Communication Design Studio. It serves as a platform to encourage collaborative practices deriving from and contributing to elusive aspects of cultures, philosophies and ideas in general. By experimenting with and incorporating patterns and paradigms to express the intangible, it aims to weave a dynamic fabric of awareness leaving insiders and onlookers with a sense of connecting.

At Anugraha, we would be delighted to work on anything apart from luxury brands and things that promote consumerism in general. Therefore our clients are mainly from the social, cultural, educational, environmental and medical sectors