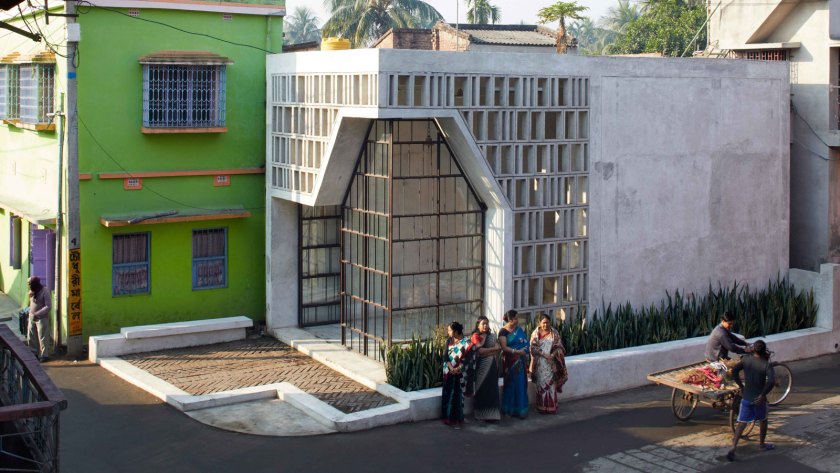 Led entirely by people’s initiative to improve upon their existing version of the religious podium, the project strategies low-budget with detailed modular precast jalis to optimize time and resource. It trained the local public health contractors in various construction techniques to expand work opportunities.

On the other side of the intersection from the Wall House is a ‘Thakur Dalan’, a permanently covered podium reserved for frequent rituals of various deities and a focal venue of religious festivals. During the construction of the residence, the patrons of the trust that maintains this pavilion approached Abin Design Studio for effective intervention. For the conception of Narayantala Thakurdalan, the relationship of the people with the place was observed over a span of several weeks – how some people would offer their prayers twice a day while many visited only occasionally, how a few devotees spent considerable amounts of time offering obeisance while others simply bowed their heads from their cycles as they rode past. This place of worship played a different role in each person’s daily life and this provided cues for the design of the space.

This small yet interesting corner in the centre of the community became the source of inspiration – it hosted holy rituals at celestial intervals, remaining as an empty sacred space for the rest of the year. The form generated acknowledged this pattern as a wholesome mass with the symbolic gesture of a missing temple.

Although the existing structure held immense sentimental value to the people of Bansberia, they were quick to take on ADS’ suggestion to rebuild completely when they saw how the new proposal respected the same idea and sentiment of the place.

Seed money was provided by influential clients and funds were collected from members of the community to inculcate a sense of belonging and ownership. The studio also contributed to the project while putting the ADS Workshop to good use.

The corner is designed to be column-free and porous encouraging congregation during festivities to spill over the physical edge of the structure. It was detailed with modular pre-cast jali units – that optimized the time and resource. Based on the drawings provided, the customised ply formwork for the jali was made by the locals. The pavilion’s finishes were designed to be simple with an unpretentious purity keeping construction and maintenance costs to a minimum.

The temple was completed in six months from design to realization. It hosted the community’s Durga Puja festivities in October 2018. While the final outcome was well appreciated by the community, it must be noted that some feedback was received where it was felt that the previous structure, having had a long-term association with the members, seemed more ‘at home’ than the new one.

Abin Chaudhuri founded Abin Design Studio, which is exploring the ‘unknown’ journey, experimentation with materials and technology, and the engaging art and culture,  aiming to provide a ‘soul in the shell’.

The studio is engaging design in the urban fabric and peri-urban edge, as a catalyst for deliberate change. His work focuses on the idea of holistic design, not just limiting to ideas, but also physical manifestation through multi-disciplinary collaboration. His explorations intend to push the boundaries of thought, prevalent socio-cultural landscape and spatial construct, challenging the role of architecture in the society, by being unafraid of unfamiliar explorations. The studio is also the recipient of several national and international accolades.