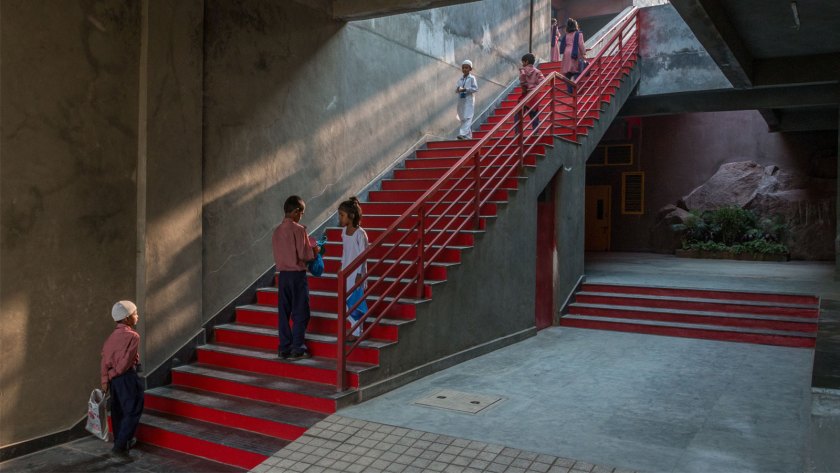 Built on a shoestring budget, the Hilltop School by DesignAware incorporates the rocky terrain as part of the vibrant design in a neighbourhood below the 16th century Golconda Fort.

The Hilltop School (officially known as the Bright Horizon Academy) is on a site that is highly contoured and was covered with sheetrock and buried under a blanket of garbage piled on over decades. The client had a programme requirement for basic educational infrastructures such as classrooms, a library, laboratories, offices, and staff rooms that could be built on a shoestring budget and require little maintenance. Material choices had to be affordable as well as durable. Articulating the peculiar and difficult topography of the site and its surroundings posed a major challenge: due to proximity to heritage structures and dense urban context, most of which is residential, blasting the rock was not an option, and other methods were not affordable and thus it took the rocky terrain as part of the design layout. The school was financed by a non-profit educational trust run on charitable funds.

Though the open playground on the upper part of the site was the easiest place to build, the studio decided not to disturb it and instead to design on the rocky cliff that connected the upper and lower parts of the site. We did this without breaking or blasting any of the existing rock on-site, instead of bringing the rock into the building and making it a part of the building, sometimes as walls and sometimes as floor.

The entire building is naturally ventilated, and in the classrooms, windows are arranged at different levels to let plenty of light in at different times of the day as the site slopes towards the side of the road. The classrooms have a monochromatic colour theme based on age groups and classes: yellow, orange, blue and green in contrast to the grey of the cement plastered walls. The school respects the scale of the adjoining courtyard houses by creating a small entrance into the kindergarten, also in response to the scale of the younger students. The building is left unfinished in its exterior, with exposed concrete walls that deliberately negate colour. And yet, the colour palette of the context takes on and is reflected in the windows, doors and grilles. Reds, blues, yellows and greens create pops of colour as accents in contrast with the grey of the concrete. The same colours reappear in subtle pastels in the classroom interiors. The site, apart from being a challenge, is also the beauty of the project. From its topmost level, the entire city is visible: the Golconda, the Qutb Shahi Tombs, the skyscrapers of Lanco Hills and the unchecked low-rise, high-density houses beneath. Each of the lowest and highest levels of the school has abutting streets. The varying levels allowed a reduction in vertical circulation, by providing entrances from the street directly to the ground and first floors.

Mohammadia Educational Trust and individual donations.
DesignAware started an independent crowdfunding campaign called #MakeProgressPossible through which we have been collecting used books for the library and other donations from individuals.

Arshiya Syed, who wrote an article on the project for thinkmatter, truly summarised the impact. Here is the excerpt from the article:

“The Hilltop School, despite the challenges of keeping construction costs to the bare minimum, preserving the natural environment, and complying with building regulations of the heritage zone, still achieved its aim of creating an inspiring environment of learning in and from. A project for a charity school in a low-income neighbourhood, commissioned by a non-profit educational trust run by a woman, designed on a pro bono basis by a woman architect setting up her independent practice: to most people within and outside the architectural community this might not seem an extraordinary task. But having been actively involved in the design stage and peripherally during construction, I cannot emphasize enough the challenges that were faced during the process which was to do with the nature of work, dealing with other consultants, and managing the team involved in execution. Many of these challenges may not even have arisen if the voice of authority belonged to a man. Women in architecture have to do more to be heard, be visible or simply work, and it is time our community, professional and otherwise, acknowledged this.”

Youtube Video
thinkmatter article
a link to the project

Led by Takbir Fatima and Abeer Fatima, DesignAware is an interdisciplinary experimental design and architecture studio born of a desire to create awareness through liveable, wearable, usable, accessible and responsible design. Situated in Hyderabad, the studio focuses on process-oriented design, and their projects range from lighting to furniture, interior design to renovation, and residential, commercial and institutional architecture, as well as socially relevant projects, such as a pro bono micro-mosque for the elderly, and a charity school for students of disadvantaged backgrounds in the heritage zone of the Golconda Fort in Hyderabad.