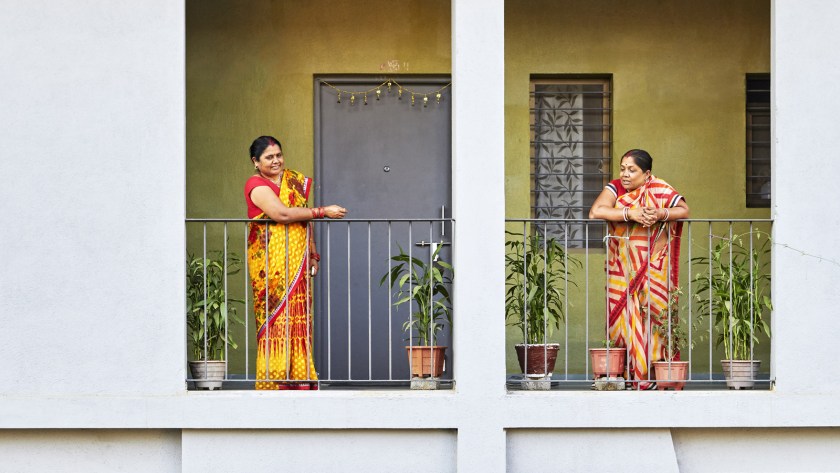 The project successfully implements a typology that responds sensitively to the needs of the family and community within the space constraints of company housing.

In the wake of great changes to our lifestyles and their concomitant effects on the environment in the last decades, community building and social sustainability have become critical to ensuring the ecological health of the planet. This housing project aims to search for a typology that responds sensitively to the needs of the family and community within the space constraints of company housing.

The site is located in a small industrial township about 60 km to the north-east of Mumbai; the new housing being meant for families of employees working in the factory. The existing housing follows a standard model where vertical movement forms a core with tiny lobbies leading to four units on each floor. The apartment units have a designated living room, bedroom and kitchen and are often insufficient to provide for the multi-generational families that occupy them. The lobby itself is a dark space discouraging interaction between neighbours.

At the building level, the challenge has been to re-establish community interaction and build a sense of belonging amongst residents. The reference for a successful counter organizational model is that of the quintessential Mumbai Chawl where units open onto a linear corridor. This typology opens the building to the outside and is also suitable for the warm and humid climate of the region as it allows excellent cross-ventilation in each unit.

In the new housing, circulation is designed to hold the spill-over for household activities. In each block, four apartments of 540 sq. ft are strung along with the corridor space. A staircase sits at one end of this corridor. The form of each staircase is carefully articulated to give the block a little twist and give it an identity of its own. The ground floor apartments are accessible directly from the outside with their own “otla” (raised entrance level plinth), an element seen commonly in traditional houses of India (pols, wadas etc). The apartments on the first and second floors have a balcony opening to the back.

Three such blocks come together along with a semi-round monolithic block to form a large central community space. The corridors on the upper floors open onto this central courtyard space.

Coding flexibility into the Private home

Within the apartment itself, the critical move for re-designing the layout is the creation of non-denominational multi-purpose spaces that could be adapted as per the needs of the family. Families occupying these houses were known to have varying densities. Typically under these circumstances, spaces are not used exclusively for living, sleeping, eating etc. Activities are far more fluid and spaces tend to be used more organically.

So in addition to two rooms and a kitchen, a small entrance space is carved out in the allocated area. This multi-functional ‘lobby’ space is intended to be flexible: it can house a small cot for sleeping, a study table, a small dining table or be used to create an ancillary living space. It also creates a buffer between the inside and outside. The kitchen is placed to the front of the apartment with its window looking onto the corridor. This enables the women, who in this case are the primary homemakers, to connect to the outside passing world as they attend to daily chores. It also lets them keep an eye on children playing in the corridors or the courtyard beyond.

The tectonic of the building emerges out of a frugal approach to the use of resources. The fact the people living here don’t own their homes requires them to be robust and easy to maintain. The construction system is the most commonly used concrete frame with brick infill, made with local construction workers. The structural system is carefully calibrated through an expression of its elements – slabs, beams, and columns – to produce a facade that helps to proportion the building and scale the blocks to a more humane level.

Studies of the housing done more than two years after completion show that the spaces are used as conceived. The apartments are well ventilated and lit creating a healthy and vibrant living environment. Women approve of the location of the kitchen and the flexible lobby is the most popular space in the home. The corridors and otlas have become meeting and interaction points for the residents. Women extend their everyday activities of food preparation into the semi-public spaces, toddlers learn to ride bicycles in the corridors and slightly older children play cricket in the security of the enclosed courtyard. Gatherings like marriage dinners and small parties are held in the common spaces. The landings of the staircase, overlooking the mountains on the horizon and wide enough to hold a narrow bed, have become popular spaces to hang out.

The monsoon in all its glory lashes these parts of western India from June till late September. The semi shielded corridors, open staircases and balcony spaces give the residents the possibility and various options of enjoying these natural phenomena. With its frugal use of material, sensitive response to climate, and careful planning to focus on the users and the community, the project seamlessly achieves a balance between social and ecological sustainability.

A link to read more about the project

DCOOP is a Mumbai based architecture practice established in 2003 by Quaid Doongerwala and Shilpa Ranade.

The firm has worked on a diverse range of projects including individual houses, retail stores, offices, institutional projects and master planning in different parts of the country. Our projects have won awards and been published in leading national magazines. Quaid and Shilpa have lectured and shown the work of DCOOP at several prestigious platforms.