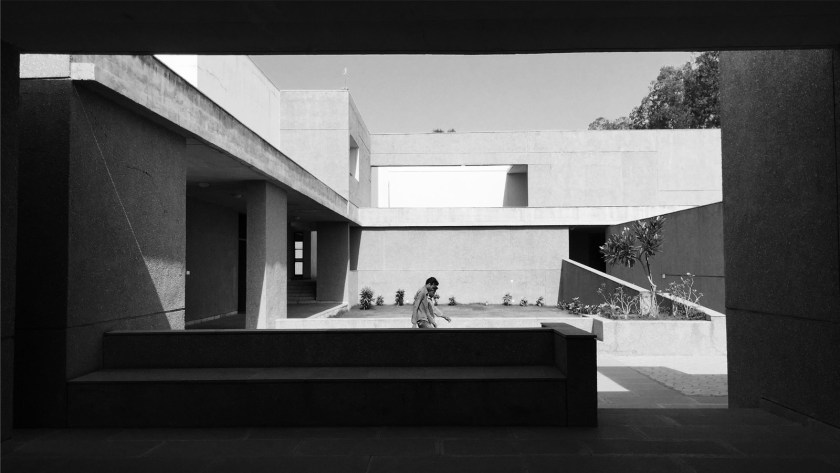 The Aparnaa School is an alternative to the typical campus development: it is a site for the testing of ideas instead of prescribing master plans. A place where time is allowed to gain value and is measured on and with the manmade. And an environment that is able to hold within itself many meanings of use and incrementality of growth.

Formalized through a series of linked courtyards around which small learning communities are organized, the spatial character evokes a familiar archetype. However, this was not the emphasis or the genesis. Instead, we looked to the architectural program to provide endurance which is material, tangible and practice of the everyday. The act of programming is a practice of bringing convivial complicity between activities officially programmed and ones that aren’t, such that they need the other’s presence. Complicity that engages us in the search for a greater economy of means with the goal to intensify and expand the impact of a limited set of operations, asking less to be more through the interweaving of functional activity and material conditions. This attitude allows us to be a nomad within the built environment, consciously engaged with and using different conditions of the built form. And this cycle of activity and remembering, played out day after day, reinforces patterns of living that generate and sustain the culture of the place.

Architecturally, the school is much less of a study in spatial terms as it is of conditions between. That is, it is a study of thresholds and the processes that are at play in their shifts and negotiations.  In its materiality, the project is an attempt to bring formal aesthetics to the effect of sun, rain and all manners of growth on its surfaces; an architecture less to avoid than to redefine through grace the relentless heat and dust of central India.

The Aparnaa School continues as a practice and an experiment, the architecture an extension and a record of it. Embracing an economy of means and integrity of the process, it remains under construction, quietly subverting the before/ after paradigm.

Shubhra’s practice involves designing buildings and teaching architecture. With graduate and postgraduate degrees in architecture and a minor in theory and criticism from Cornell and CEPT Universities, she founded Shubhra Raje built environments, an architecture and design studio that concerns itself with relevant design, architectural economy and spatial ecology.