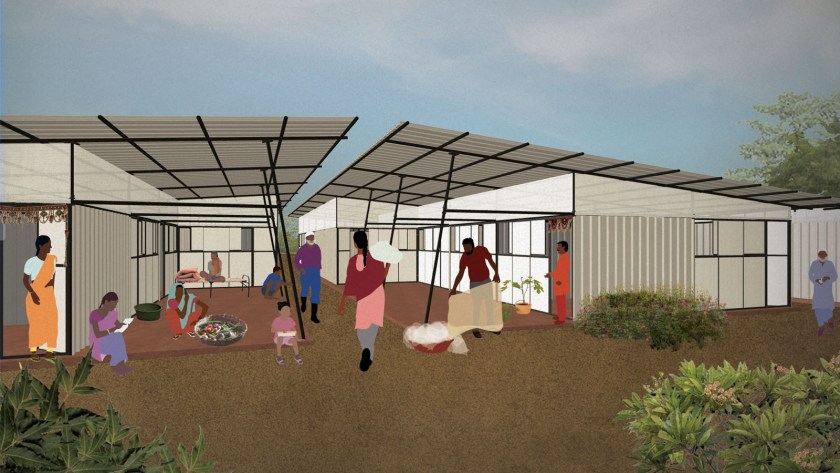 This project is a response to the onsite living conditions for temporal migrant construction workers in Ahmedabad, Gujarat – aiming to provide a healthier living condition, as well as dignity, for a marginalised population – through a holistic design approach focusing on well-being, sanitation and children’s education.

Due to rapid urbanisation, large-scale housing developments litter city margins throughout India. The rate at which these developments are being built thrives off the abuse of unskilled labour. The exploited labourers are reliant on a financial opportunity, creating a dependent relationship for both them and the developments: a dependency resulting in a juxtaposition of luxury and squalor – which is on par with refugee camps internationally that receive much more architectural attention.

The labour colonies belong to a Kinetic City; an incremental city in motion, characterised by recycling materials, constant modification and reinvention. The labour colonies are innovative, but highly susceptible to dysfunction, suffering from a lack of basic infrastructure and planning. As the root of the problem lies in cultural, social and political acceptance of discrimination, true solutions go beyond the limits of architecture – but architecture can contribute substantially to improving the quality of life for the workers. The project proposed a drastic immediate improvement; furthermore, it attempts to suggest an appropriate first move in an incremental process of systemic change.

The project developed from earlier personal thesis research, which included documentation of materials and spatial configurations used in construction workers’ colonies throughout Ahmedabad over an 18 month period.

At Nebula company’s invitation, we drew on this research to design a network of open spaces, housing units and amenities. There is a focus on design elements that are best initiated at project conception such as overall site drainage and ventilation, as well as strong input from the labouring community and collaborating NGO’s such as lockable doors and windows on rooms, and ease of visiting children in the creche.

The project documents a struggle to employ architecture as a means of achieving a desired standard of dignity for the construction workers. It accepts that a realistic way to achieve this is by employing local techniques and incremental improvements, rather than by imposing a one-off, technologically advanced solution. The result is a design that is simple in terms of its spatial configurations, materiality, and structure, but complex in terms of the social, cultural and economic barriers it had to negotiate.

This project was fully funded by Nebula Infraspace LLP.

The project can accommodate up to 500 people at one time and acts as a prototype for the client company to continue to develop. In the two years since occupants moved in over 2000 people have temporarily lived here. In its first year, reported diseases, such as malaria, cholera and dengue have gone down by 75% compared to the previous year.

Temperature studies were conducted, finding that on a 45º day, the new design remained 10º cooler than the typical existing colony housing made of black plastic sheets. This is achieved through a much higher ceiling height and an upper section of ventilation screens.

The finished demountable and relocatable labour colony cost approximately INR 500 per square foot, which was at least half the square foot cost of other outside prefabricated options the Nebula company was considering at the time. This cost was also inclusive of services and amenities: bathing, laundry areas, 29 toilets, as well as creche fixtures and portable gas cookers in each room – features which necessarily bring much higher square foot costs – and which the other options did not factor in.

Yet as it is designed to be demounted and reconfigured on different future developments, the overall costs to the company will reduce as materials are re-used.

This construction cost is also inclusive of the site preparation and landscaping, a crucially early and additional expense for any project that aims to tackle the severe issues that arise from poor site drainage during the rainy season.

The final and full construction cost was a driving factor of all design decisions, as the project is intended to be an example prototype, to be replicated and improved upon, not only by Nebula Infraspace on other development sites, but for other relevant organisations.

The limited budget was directed to the design features related to improving health and dignity that could not be compromised, and the stated needs of the community itself.

A challenge of being an early prototype is that the construction budget was often compared to the predominant method in Gujarat of extremely low/no-cost makeshift structures, even though this style of housing is undignified and rife with health and safety issues.

We hope now that the Nebula Labour Colony is a new challenge, providing examples of how low-cost interventions can rapidly improve living conditions.

Hatch Workshop is a research & design partnership, started by Hannah Broatch & Mason Rattray, intended to specialise in corporate social design projects with a goal to bring dignity to the conditions of marginalised communities.

As a design-build duo, we collaborate with companies, local NGO’s and workers focusing on the quality of housing, associated amenities and working environments through appropriate incremental interventions.