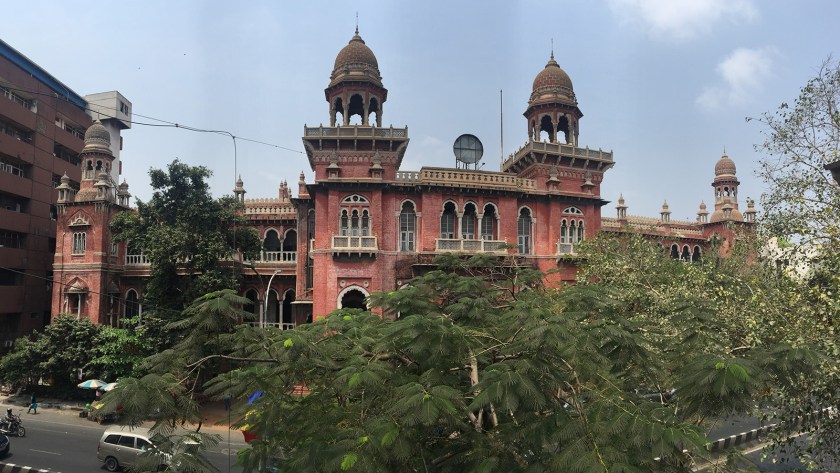 Having a long history of over 200 years, SBI owns nearly 150 heritage buildings across India. This project features the efforts undertaken in documenting and conserving four valuable heritage buildings belonging to the State Bank of India (SBI) in Chennai, Madurai and Nagapattinam.

The Main Branch of SBI is located in the prime business district of Chennai along the Beach Road (now Rajaji Salai) which features many monumental heritage buildings such as the High Court Complex, General Post Office, Madras University, DGP Office, Presidency College and Chepauk Palace. It was gutted by fire in 2016 and since then the office here has been vacated.

The Main branch building is a listed Grade I monument of national significance. It was built in 1886 to house the Bank of Madras which later became the ‘Imperial Bank’ renamed as the State Bank Of India since 1955. This building was designed by Ar. Henry Irwin (1841 – 1922) and built by Namberumal Chetty. Irwin was very active as head of the PWD. He became known for his designs that reflected the characters of Mughal and Hindu architecture set on a grand scale reflecting the colonial influence. Thatikonda Namberumal Chetty (1856-1925) was a leading contractor in Chennai during the 1880s and has done many buildings for Henry Irwin.

In July 2014, the building was gutted in fire, due to an electrical short circuit. While the structural stability has been largely unaffected, the central atrium and many of the wooden members in the roof and joineries have been charred due to the fire.

Phase I Restoration was completed in 2018 by the bank. The main intent of this phase was to safeguard the building from further damages and ensure its longevity. Phase II Restoration is now proposed to restore the grandeur of the original building and CUBOID was selected based on a national-level, two-stage competition.

This building is located in the heart of Chennai behind the Local Head Office (LHO) of SBI in College Road. Constructed as the residence of James Anderson, a diligent British officer, the building was set within a sprawling site developed then as a botanical garden with rare species. Efforts are on to restore the building which is in a dilapidated condition and therefore not in use.

This 200-year-old building is a classic example of the British Colonial Villa adapted to local conditions. The structure has an interesting cruciform layout with an elongated entrance porch (probably extended over time). The staircase is fitted along the semi-circular rear portion with excellent carpentry work. Traces of the old flooring featuring black and white diamond checks are still intact and the joineries bear striking resemblance to that of the Main Branch Building. The local adaptation is evident in the wrap-around lean-to roof verandahs in both the ground and first floors.

The building is located on the fringe of Nagapattinam, a prominent town along the Coromandel Coast of Tamil Nadu. The building is set on a vast site and is surrounded by few more such sites with elegant British Colonial buildings, but all of these are dying a slow death. During occupancy, various concrete additions and alterations were made. It was vacated recently due to safety concerns.

It is a simple two-storied building with spacious halls, a grand wooden staircase and deep verandahs featuring arches on the ground floor and columns on the first floor. The building layout is typical of British Colonial style while the construction techniques are influenced by local practices of this region as evident in the Madras Terrace Roof of the ground floor and Mangalore tiled roof of the first floor. The pitched roof of the first floor with a conical profile bears testimony to the fine workmanship of the carpenters and tile layers. 50% of floor space is given for spacious verandahs lending a good interface with the outdoor area which features large trees and a pond.

The restoration proposal was based on two main aspects:
1) Removal of all the incompatible additions and vegetation.
2) Addition of new spaces compatible with the original structure.

The new RCC block was taller than the main building and was boxy in nature. The bricking up of the arched verandahs affected the cross ventilation and also the aesthetics. These structures were all carefully removed after providing adequate support to the main walls. The collapsed porch was reconstructed based on an old photograph. New walls were done in minimum thickness and were aligned within the original columns and arches.

This stone building is located in the centre of a large parcel at the heart of Madurai. Today various large scale office buildings and residential quarters have been constructed around, resulting in lesser accessibility and visibility of the original building. It was used as an Officers club and is fairly in good condition however not in use for the past few years due to safety reasons.

It is modest in scale but noteworthy for solid Stone Masonry, which is quite rare for buildings of this type. Laid out as a residence for one of the erstwhile officials, the two-storied building features a porch, deep verandahs in the front portion, large rooms, ornate staircase in the central hall, spiral staircase and service balcony in the rear portion. The building features Madras Terrace Roof and the flatness of the building is articulated by a battlement parapet featuring stone coping. Tall verandahs are provided with wooden louvres for protection from the sun.

The restoration proposal was based on two main aspects:
1) Removal of all the incompatible additions and vegetation.
2) Addition of new spaces compatible with the original structure.

Parts of the verandah were enclosed and some of the large rooms were bifurcated with brick/plywood partitions. An OHT was built in RCC above the spiral staircase. They were all removed and the original spaces opened up. New walls in lightweight concrete blocks were proposed in line with the existing walls/columns. The traces of old doors and windows were retained even while closing them up (in the form of blind arches/niches), so that they can be easily identified and removed in future.

Project was undertaken by the Estate and Premises Department of SBI (State Bank of India).

HCC (Heritage Conservation Committee) was the statutory body that had approved the Chennai Main branch project. In fact, HCC insisted on identifying the right conservation consultant for phase II and as a result, SBI floated a national level competition.

CUBOID won the competition and as lead consultants underwork extensive documentation and technical proposals for the restoration of the project. Detailed quantification and costing were done to convince the financial department of the bank that restoration projects involve considerable skill, special materials and logistics resulting in commensurate costs.

Following the proposals for the Chennai Main branch building, CUBOID was awarded the restoration of SBI’s heritage buildings at Nagapattinam and Madurai which was successfully completed.

The impact has been quite positive. The senior officers of SBI got nostalgic and jubilant when they saw that the buildings where they received training in Nagapattinam was saved from demolition and restored well.

For the contractors of Nagapattinam and Madurai, it was their first conservation project and they expressed great satisfaction after the completion inspite of various odds such as shortage of skilled craftsmen, escalating labour costs, Covid lockdown and budget caps.

As consultants when we shared the before-after pictures of the restored buildings, our clients and consultants were greatly impressed and expressed their wishes for us to take up more such projects.

We nominated this project for the HUDCO 2020 Design Award and got the second prize. The project was featured in their annual publication as well.

Our team of young architects had a great experience in working and learning as they were able to appreciate the finer aspects of our traditional construction techniques. Inspite of the enormous paperwork, prolonged planning phase, stalled execution (due to Covid) and limitations of contract teams who never had prior experience of such restoration projects we managed to pull it off and the result has been rewarding for all stakeholders in terms of the professional capacity and socio-cultural responsibility.

Cuboid Architects is a team of professionals, each with diverse experience in various fields such as architecture, conservation, interior design, urban design, BIM and project management. The operations began as a partnership firm in 2003 in India and expanded to the United States in 2016.

The Cuboid team is keen to create designs of lasting value by enhancing the way people live and interact, promoting workplace efficiency and productiveness, and by contributing to a community’s character and service to its members. Their designs show respect for the environment and strive to protect the environment for future generations. The value they want to create is derived from the knowledge and passion for what they do.