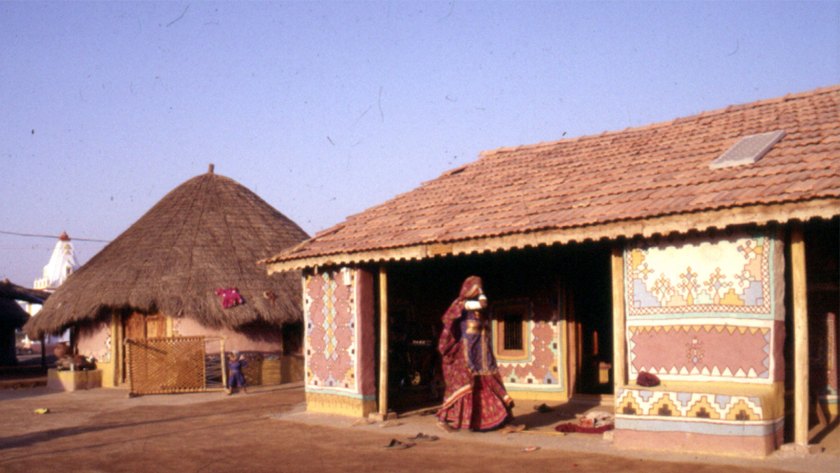 Post 2001 Gujarat earthquake, Gandhi nu Gam at Ludiya was one of the sixteen villages where Vastu Shilpa Foundation was involved with the rehabilitation process of 455 traditional bhungas with three schools, a grass bank, community buildings, production centres, religious shrines, the electricity network and a water harvesting system.

The devastating earthquake, measuring 6.9 at the Richter scale struck Gujarat in India on 26th January 2001, left more than 20,000 persons dead and millions homeless. The worst-hit was the desert-region of Kutch. Kutch has a distinct identity essentially derived from its indigenous culture, traditional architecture, local craft and vibrant and unique ethnic communities. Gandhi nu Gam at Ludiya was one of the sixteen villages where Vastu Shilpa Foundation was involved with the rehabilitation processes. The rehabilitation was the construction of 455 dwellings along with service infrastructures such as sanitation, water-supply, water-harvesting ponds, check-dams and civic amenities such as schools, health-centre, grass-banks, administration office and craft centre.

The typical traditional dwellings of the region, ‘bhungas’, have withstood the test of time for centuries and survived the devastation of the severe earthquake. The ‘bhunga’ encapsulates indigenous wisdom, sensitive understanding of local resources, material and mastery of techniques alleviating extreme climatic and physical conditions. It accommodates spatial requirements of a traditional lifestyle. The circular form, monolithic construction, small openings, lightweight conical roof and low slenderness ratio of the walls renders it earthquake resistant. The technology employed relied on local resources and traditional wisdom. It is earthquake-resistant as well as climatically sustainable. It also ensures its subsequent maintenance by users themselves. Earthen walls, round shapes, thick and dwarf walls, conical roof, small openings, seven-layer plastering and homogeneity of material all render them earthquake-resistant as well as cool in hot-dry climate.

Design Considerations:
Participatory development: Users were involved in key decision areas such as a selection of site, location of the plot on site, choice of neighbour, plan configuration, provision of amenities and house construction.  Thus, the appropriateness of the built form resolution and a sense of belonging was extremely high. The process started with a village meeting to identify the overall needs of the user group for newer developments. Then a styrofoam-cardboard simulation kit became an interactive design-tool facilitating accurate & easy comprehension. The preliminary design and layout were prepared by the designer following site features, access and orientation. The users then reorganised their plots on the simulation-kit as per their choices of location, neighbours and clustering pattern based on kinship, customs and occupation. The architect remodified it, respecting user feedback, incorporating the considerations for climate, open-space distribution and scales of clusters. The kit was then taken to site and one plot was pegged for the villager’s to understand its size, shape and the available space. After onsite exercises, each villager was allocated his preferred location, neighbours and arrangement of ‘bhungas’ on plot and the layout frozen. This finalised arrangement was then translated into a working-drawing for execution.

The element of change with a continuum of tradition: Culturally and environmentally appropriate aspects of built form and neighbourhood were retained, i.e. clustering within the settlement, dwelling forms and materials; while the opportunity for introducing newer dimensions for improved living conditions was seized. For example, provision of smokeless-stoves for a healthier kitchen environment, solar-lighting (and house-to-house sanitation for comfort and hygiene etc.

Sustainable development: The settlement is rendered sustainable through design by way of its socio-cultural appropriateness; through construction technology by way of its favourable climatic performance in hot-dry desert climate; and through resource-management by way of water-harvesting ponds, check-dams agricultural cultivation as well as solar-lighting.

Social development:  As a rehabilitation effort it was important to reinstate the entire living environment and recreate the networks that sustained it. Hence, not only the houses but through their clustering, their social interaction was reinforced. Clustering also provided for their occupational and economic work-activity provisions and requirements. Craft tools and marketing support was also provided for economic sustenance.

Infrastructure: Water needs were supported through rainwater-harvesting and check-dams. Solar-lighting is provided for the decentralized self-sustaining electricity. House-to-house sanitation, grass-banks for cattle, schools, health centres as well as shrine and community-hall were developed.

It is only this intervention which prevented villagers from migrating to areas near the city. They were troubled by successive droughts and their only dwelling was devastated by the earthquake. It has, due to the retention of their unique habitat, resulted in its becoming a tourist destination. It has again rekindled hope in them regarding the area and the potential it has for them. It is now an oasis in the desert.

A link to the project.
Awards and Recognition