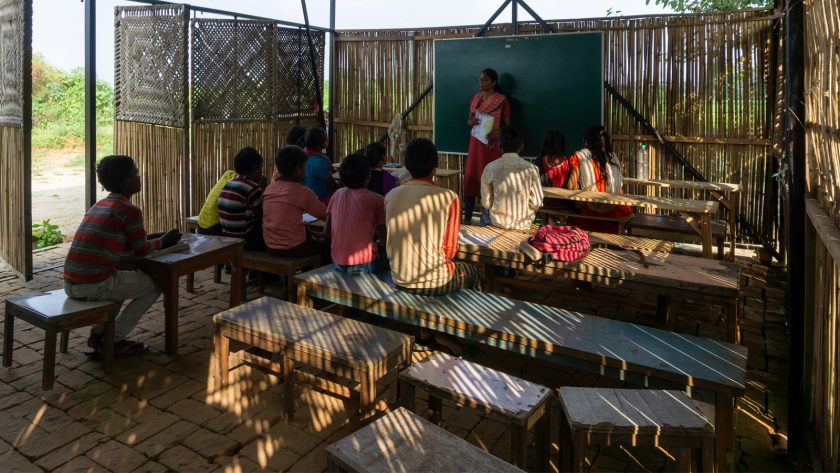 Modskool is the modular design and construction of a low-cost school that can be built within days and dismantled within hours to protect from evictions faced by informal settlements in Delhi, India.

Every year, parts of Indian cities disappear as settlements built informally by the poorer citizens continue to be evicted. The modular school was initially designed as a response to such repeated forced evictions in Delhi, specifically for the children of farmers along the river Yamuna.

After a school for around 200 children in a farming community on the floodplains of Yamuna was demolished due to the ‘illegal’ status of the settlement, the community approached the design team to help them design a temporary school that could be dismantled before the bulldozers arrive on the ground to demolish.

Through several consultations with the school staff over 2016, the structure was designed as a steel frame bolted in a way that it could be erected easily, and disassembled for rebuilding or relocation when required.

The infill walls, doors and windows were made out of bamboo, reused wood and dried grass – materials that farmers commonly use to build homes in the area.

The school was built hands-on in less than 3 weeks in the summer of 2017 by the students, school staff and parents from the village along with the help of around 50 volunteers from outside the village who heard about it on social media.

The project was crowdfunded at its first location, Yamuna Khadar.

Second location in Kulesra was funded by The Child Trust.

The school provided a secure and creative educational space for around 200 students for a year in Yamuna Khadar. However, due to the land ownership conflicts, the school had to be finally dismantled. It was relocated further south of the river for the children of farmers in Kulesra village with the help of the grassroots NGO The Child Trust.

At the first location, the school was built using local building materials such as bamboo and dried grass, and at its second location, it was built using the local craft of ‘charpai‘ – traditional cot weaving found commonly in the area.

Not only was this approach the most affordable and employed local skills, but it has also helped create a sense of ownership and pride within the community when they saw their building materials and processes adopted in creating a sustainable school for their children.

The design approach of the school also mirrors the teaching approach which focuses on holistic and sustainable education.

The school today exists not just as a much-needed education space, but also as a community infrastructure with The Child Trust having supported the surrounding farming community through the lockdown months.

Social Design Collaborative is a community-driven design, art and research practice to provide access to design for all through collaborative projects.

The team believes in an interdisciplinary approach, working with community-based organisations, social workers, activists, academics, lawyers and government organisations, whilst understanding the needs of all the stakeholders involved.

Design has the potential to address and solve many of our society’s current challenges but it cannot do that through design alone. The processes of community engagement, listening and learning-by-doing form a major part of their design approach, over finished design products or architectural artefacts.

It is a project that speaks to ideas of ecology, o

Written and contributed by Technology for Wildlife

Written and Contributed by Studio ABD Conceived a

Written and Contributed by Bookworm Trust Over 50

Written and Contributed by Footprints EARTH It is