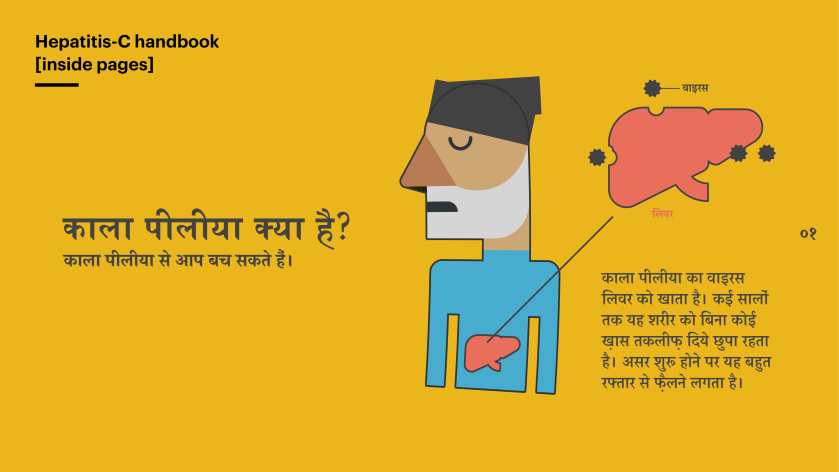 16/06/2021 kokum .co Communication Design, Health and Well Being Comments Off on KAALA PEELIYA, COMMUNICATING THE SILENT KILLER IN PUNJAB

Hepatitis C has become a silent epidemic spreading across rural Punjab, India. However, the adoption of its treatment has been woefully inadequate and slow. A collaboration between Dr. Reddy’s Laboratories and Treemouse Research & Design, the project decodes the dynamics of Hepatitis-C in rural Punjab & devises a financing system that would reduce the perceived cost of treatment.

Punjab, formerly the richest state in India has seen its glory days owing to its highly fertile soil. In the last few years, however, the ‘health of the state’ has deteriorated owing to rampant alcohol & drugs abuse. There is, on the other side, the rise of a silent killer – Hepatitis C. Hepatitis C or Kaala Peeliya as it is called in the local dialect is a ‘non-visual’ condition. It doesn’t affect the body in its early stages and can remain dormant for up to 20 years post which leads to fast decay of the liver. During the course of this project districts like Muktsar was visited where ~60% of the population were at varying stages of the disease.

Pharmaceutical companies were baffled by their findings that with such a large prevalence of the disease, the treatment was not being adopted at the same rate. One of the answers received from them was that the cost of the treatment was too high, rendering it unaffordable for a farmer. However, the Indian Government launched subsidies reducing the treatment from Rs. 1,00,000 to Rs. 45,000. Further, micro-finance institutions also started offering loans at low monthly instalments and no mortgage. Despite these interventions, the rate of adoption of the treatment remained just the same.

Assuming that the challenge lay in the perceived initial cost, Dr Reddy’s Laboratories approached Treemouse to strategize a new model for a financing system acceptable to patients. To uncover this model, the engagement started with research around two broad areas – Decoding the dynamics of Hepatitis-C in rural Punjab and creating a financing strategy that would help reduce the perceived cost of treatment.

The research was undertaken to understand what influences lifestyle choices, financial decisions and perceptions around Hepatitis-C & its treatment. Through this, we uncovered a culture of misinformation, confusion and mistrust around Hepatitis-C and formal medicine. The key challenge emerged as a need to build an information and trust network, instead of the hypothesized financing system. Based on the analysis of patients’ mindset, their influencer network and key barriers to formal treatment, patient archetypes were built. This then helped construct a patient journey, through which intervention areas became apparent. It was also evident that effective grass-root level communication was needed for the company’s offering to become relevant in this ecosystem.

The following frameworks were developed to explain the Hepatitis-C ecosystem to the client and aid in designing the final intervention strategy:
– A framework to understand the socio-cultural dynamics of rural Punjab with respect to finances & healthcare.
– A framework to decipher different points of intersection in the community that would influence an increase in the adoption of formal treatment. These intersection points were – RO (reverse osmosis) water stations, money lenders, local heroes, regional medical practitioners, local quacks, existing patients and medical representatives.

A three-step strategy was devised. The first was to establish a richer vocabulary for conversations around Hepatitis-C within the local community. The next was to guide the flow of patients towards formal treatment. And the last was to sustain their trust in the formal medical system.

This strategy included the following pilots:
a. A communication campaign that created community awareness around Hepatitis-C, its causes, symptoms and treatment.
b. Collaboration with RO stations to dispel myths of Hepatitis-C & its relationship to water.
c. A Hepatitis-C handbook and orientation program that empowered key influencers to catalyse the required information and systemic changes.
d. Empathy handbook & workshops with Dr Reddy’s Laboratories’ Medical Practitioners to equip them in playing a trusted advisor’s role in any patient’s journey. They were also empowered with the know-how to provide financial guidance to patients who needed it.

Health camps were regarded as prime importance. People visiting the health camps engaged with local heroes (identified influential people from the community who have undergone a full cycle of treatment) and counselors. This active participation helped dispel misconceptions and propelled the patients to adopt newer ways of understanding their condition and their recovery from it.

In a month of launching the pilot, there was a 40% increase in patients reaching out to formal treatment channels to undergo therapy. There also was a rapid increase in patients willing to be routinely screened for early detection of Hepatitis-C. Further, this project became a case study for furthering patient-centric initiatives as an offering by Dr Reddy’s as a launch-pad, such models of interventions were capitalised in other therapy areas.

We are a team of young creatives driven to bring smart, thoughtful products & services closer to you. Treemouse began with a single goal in mind — to extend the boundaries of design in India from applied aesthetics, to that of transdisciplinary integrations, thus making innovation usable, relevant & meaningful.