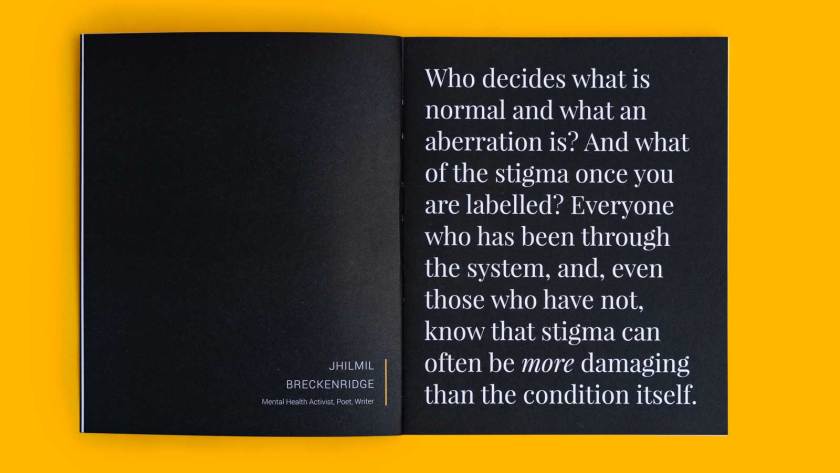 Mental health is challenging to represent visually when considering concepts like inclusivity and diversity. ReFrame, initiated by MHI and designed by Studio Kohl, is a journal focussing on different vantage points to help the reader understand complex concepts and facts: that mental health issues are more situational and contextual than is believed.

We launched the first ambitious edition of Mariwala Health Initiative’s (MHI) journal, transforming a simple report format to a more immersive, impactful experience that ultimately demystifies the big picture of mental health. We took special effort to research diagrams and imagery already in this domain. This resulted in the information becoming more easily engaging to a wider audience than those in the NGO sector in India.

Along with content inputs that made the topic understandable at a conceptual level, we, with the MHI team, came up with the name ‘ReFrame’. The journal aims to add more dimension to the existing conversation on mental health in India. As we progressed, the MHI team and Studio Kohl decided to put the same effort, time and resources into building a piece of communication that had the potential to destigmatise dialogue about mental health and understand the politics of the topic, challenge existing notions and educate those stakeholders in progressive ideas of mental health, correcting biased and outdated notions and prioritising inclusivity.

ReFrame’s first issue, centred on the idea of Funding Mental Health, was written in-house. Later, in its second issue (on bridging the mental healthcare gap), the design team developed a template to include multiple voices on mental health with an article format fitting into three broad categories:
ReVision (understanding basic concepts),
Contexts (amplifying voices from different communities) and
Engage (innovations in service delivery that breakthrough social mores and conventional norms).
Our third issue, currently a work in progress, explores mental health beyond its clinical context, taking it outside the clinical legacies that we have inherited from a violent history of psychiatry and understanding the need for community and the recognition of the oppression of certain identities.

Much of the content of this journal revolves around correcting existing stigmas and understanding of mental health that do not serve the public and are possibly even dangerous. Different vantage points are presented to the reader to help them understand complex concepts: that mental health issues are more situational and contextual than is believed. We thus came up with the name ‘ReFrame’ to fit the journal’s content because Reframing is a technique actively employed in therapy by counsellors and psychologists to help form different perspectives for their patients.

The content is built in a way that is engaging and accessible to a wider audience, demystifying mental health and questioning existing norms. The approach to design and language deliberately appeals to a global audience, but from a uniquely South Asian perspective. This positions MHI as a global leader in mental health practices, a departure from the standard: the eurocentric perception of South Asian experiences.

The book is released in both digital and print formats, it is freely distributed on request, with no charge. The digital version is available for download from MHI’s official website.

Mariwala Health Initiative is the funder of this project.

The journal has travelled to the Bill and Melinda Gates conference, has won a Kyoorius Design Award. The journal has been a transformative experience, allowing MHI to become the mouthpiece for academicians, researchers, activists and advocates of mental health. With a further boost from the passing of the MHCA (mental health care act) in 2017, which is the first law of its kind to address mental health comprehensively, we have seen these ideas proliferate rapidly and penetrate the current gender and mental health movements.

Issue 01
A link to the project

We build visual languages that define brands, and craft meaningful images informed by an involved and thorough understanding of content. A small team of graphic designers, we enjoy working closely with musicians, trendsetters, activists, NGOs and game-changing lifestyle brands which speak to niche audiences. Inspired by Indian art history & folk arts to alternative subcultures, we use image-making, in unconventional and challenging ways.