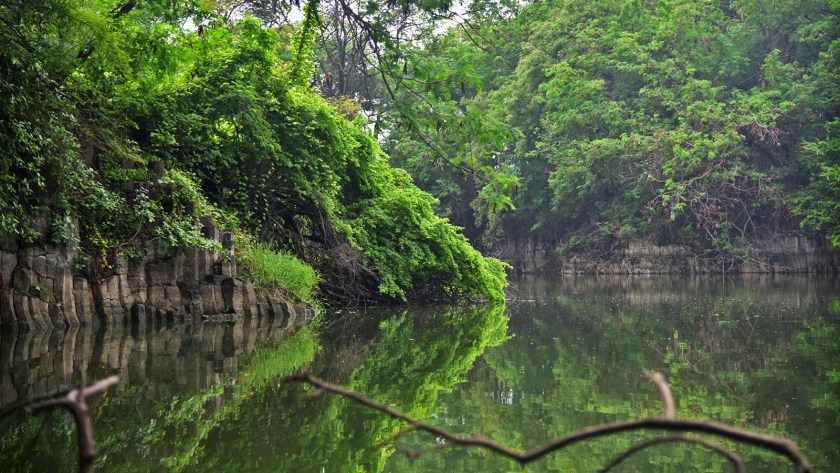 An intent to realize; a 200-acre basalt quarry is now a protected forest – a result of a process that has been designed for optimal human intervention.

There are close to 3000 mines in India that produce various minerals. Mines in Gujarat majorly produce limestone, silica sand, bauxite, and lignite amongst other minerals. Mining policies in the State are framed with the aim of facilitating environmental preservation. Two policies regulate the mining and excavation of minerals in the State under Section 15 of the Mines & Minerals Act 1957 (amended in 2015). However, these policies now seem to have taken on a role that, more than anything, facilitates mining activities in the state; of making progress by promoting mining activities.

It is in this context that the rejuvenation of a basalt quarry was undertaken.

Timba – in Mehasana – is situated about 110 km South-East of Ahmedabad, and 100 km North-East of Baroda. It is part of the geological tract that forms part of the Pavagadh basalt deposit. Mining operations in this region have been undertaken for several decades with mineral working – disturbing the natural balance – creating large, barren tracts of land.

Standing in the midst of one such ravaged basalt quarry on a hot summer day, Prof. Prabhakar Bhagwat exclaimed that he wanted to convert it into a self-sufficient forest. Concerned that he was suffering from a heat stroke, the patron hurried him to a shaded spot and offered him something cold to drink. Prof. Bhagwat, was of course, completely serious.

The idea was to return the entire tract of land back to nature – to re-establish vegetation.

And so, the process began. It was designed to ensure only optimal human interference, and began with an indigenous selection of plants, thereby enabling a vegetative cover on the ground that would ultimately assist in conserving soil moisture.

The process of restoration began with addressing the top layer of soil – making it mulch to create micro-environments necessary for the growth of native shrubs, trees, and other indigenous species. Soil from pagdandis located within the surrounding farmlands was collected and spread evenly in the area.

Weeds from the surrounding areas were introduced onto the site – and were encouraged to take over the land. A nearby stream was diverted to fill the basin and was then populated with fish. An estimate from approximately 10 years ago suggested that the lake could produce fish worth 16,00,00 INR per year.

The land itself, now, stands as an example of a rejection of the hierarchy between man and nature – with human interventions only facilitating the safe-guarding of the ecosystem that has been established over the last nearly 5 decades.

Within the studio, we have come to regard this project as something of a benchmark. It is a project that speaks to ideas of ecology, of restoring balance, of establishing an ecosystem that is self-sufficient. It distinguishes itself by creating value that is embedded within the land; a value that is removed from the Anthropos – reinforcing the ability of a commission to be more than its immediate use or context. The processes that were laid out at the time have become foundational principles – principles of sustainability, of creating value within the land, of ecology – for the commissions that the studio now undertakes. It has led to:

– Questioning ideas of hierarchy between man and nature; building value within the land.
– Setting out an adaptable process that allows for the restoration and rejuvenation of land.
– Demonstrating the resilience of nature.
– A project that is a result of simple, informed solutions being deployed to address issues of sustainability, biodiversity, and ecology.

Gallery:
Images by M/s. Prabhakar B Bhagwat | © all rights reserved

About M/s. Prabhakar B Bhagwat :

M/s. Prabhakar B Bhagwat is a third-generation design studio with offices in Ahmedabad and Mumbai.

Having practised for nearly five decades now, it leads the thinking on Landscape Design, Environmental Planning and Master Planning in the country and is highly regarded for the work it undertakes in Architecture and Interior Design.

Varying in scales and typologies, the commissions that the studio undertakes are guided by uncompromising ethics, intense design processes, the pursuit of knowledge, and a commitment to the outstanding realization of the design. Research, inventive thinking and continuous learning are key to the studio’s process.