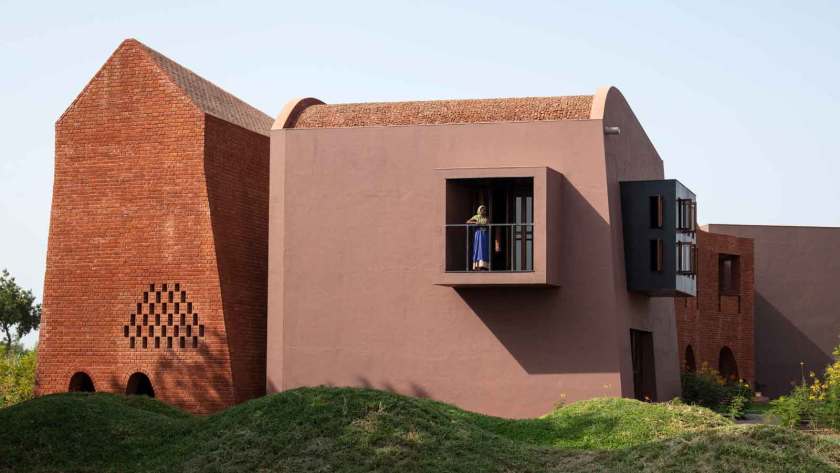 Conceptualized from a child’s early scribbles that turned into a series of dancing arches, the school is an experiment with materials and forms.

Almost all of us have been here in our childhood, and perhaps the closest memories we hold dear are not of significant events, but ironically of the insignificant ones.

Of losing oneself to wonderment, to wander under the skies, to relive in our vivid imaginations of the make-believe and many more phrases that make the song of our lives. This is the premise on which we began to design the spaces of the school at Bhadran, where a child spends his formative years, where his first friends are made, where his first memories are etched.

Conceptualized from a child’s early scribbles that turned into a series of dancing arches, the school is an experiment with materials and forms. A scribble is indicative of not being instructed, but having the freedom to express yourself in form of wavy, crooked lines, the only form a child knows. The dancing arches are a reminder of this freedom. The asymmetry of the arches reiterate that it is not always mandatory to be straight or conventional, but the irregularity at the first glance makes the forming mind curious and question. The habit of critical thinking, questioning and breaking away from the convention is what the building echoes. The plan is also irregular to allow for a meander.

The entire school is designed as a sequence of modules; each module would have a pair of classrooms and a corridor, with its tilted vaults sinuously strung. All the modules are designed to create repeated use of shuttering material made in waste steel and can be arranged in various patterns as deemed fit. Reuse of shuttering reduces the cost while using fewer resources making the building sustainable. Roof forms are a sandwich structure with concrete in between layers of brick on the top and bottom. The classrooms have skewed beams with irregular jack arches, a unit of which protrudes to come to a skylight. The roof is waterproofed with a thick layer of brickbat coba in the profile of the arches forming a playful broken brick landscape even on the roof.

We have stayed true to one material:  terracotta – bricks and only bricks in walls, floors and roofs. Sourced from a kiln close to the site, it is the love of labour from around the town and the craft they bring with themselves that lends the building its immaculate semantic and precision.

Light for us is a tangible building material. We often tend to use it like a needle to embroider moments and experiences in our architecture. The sharp dark shadows of the irregular arches in the corridor, the soft glow of tangerine through the lopsided vaults, beams of light through the slits and skylights in the classroom add to this experience, generating intrigue.

A building; a school; where the play of hide and seek is perpetual.

Set on plot of land, surrounded by tobacco fields in the town of Bhadran, the design of the school grew organically as a series of classrooms that dance their way through the trees; encountering alcoves, cracks and crevices, projections, niches, inhabited bridges, boxes, khadkis & mezzanines – adding to a composition of experiences that would weave into the fabric of the school, much like the maze-like town of Bhadran itself.

This evolved as a quilt of many small events, of small places and spaces, to hide, to collide, climb, roll, run into and out of, to satiate curiosities of a forming mind, allowing its idyllic imagination and wonder.

SRDA is a firm that investigates design with a passionate and critical eye grounded in modesty and a thirst for imaginative adventures. At SRDA every project is treated with fervour for exploration and innovation and tested for relevance in physical and social contexts against the land which will cradle it and against the man it is meant for.