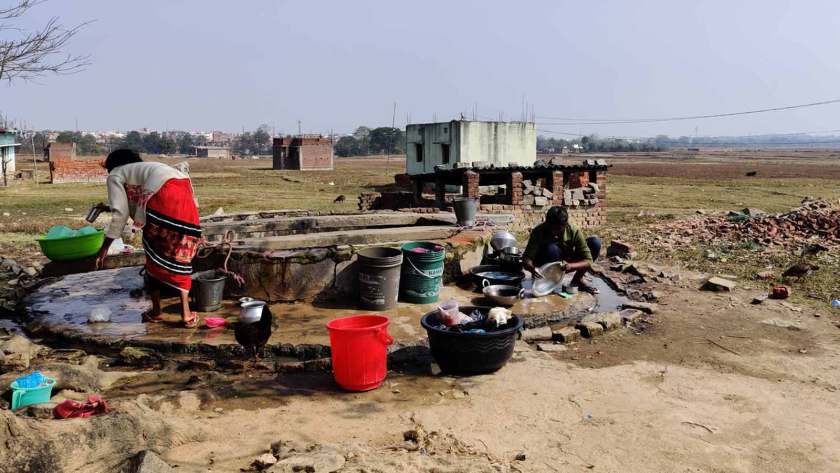 The promise of piped water supply or groundwater via borewells for informal settlements contributes to a vicious cycle. The relationship of communities to natural resource regions is severed, leading to dependence on piped systems or groundwater, both of which are themselves finite sources. Integrated Design studied existing water stresses in the informal settlements of Ranchi to revive or strengthen their links to local water resources.

Mahila Housing Sewa Trust works with 55 such settlements in Ranchi, and water insecurity is reported in each of these settlements. Informal settlements in Ranchi were traditionally reliant on community-managed resources such as open dug wells, tanks and ponds, which are closely linked to surface water sources and rivers. However, due to urban growth, inadequate treatment and discharge of wastewater into the rivers of the city, the surface and sub-surface water systems have become polluted. This, in turn, has contaminated water in wells, tanks and ponds along the floodplains of the rivers – sources upon which informal settlements were formerly dependent.

In terms of groundwater, the aquifers in Ranchi are semi-confined, which means that the water level is replenished due to rainfall and not by seepage of river water. Even though groundwater is a precious resource in Ranchi, it is exploited to the extent of 112%, and consequently, the deeper aquifers of the city show declining water levels.

The promise of piped water supply or groundwater via borewells for informal settlements contributes to a vicious cycle in which the relationship of communities to natural resource regions is severed, leading to dependence on piped systems or groundwater, both of which are themselves finite sources.

APPROACH:
Integrated design studied to understand existing water stresses in the informal settlements of Ranchi by identifying common practices and specific challenges. Basis of this analysis, the study recommends general measures that will aim to enhance access to water by improving both the quantity and quality of water available. The outcome is meant to both decrease the dependence of settlements on piped water supply systems and groundwater, and to revive or strengthen their links to local water resources.

To help demonstrate interventions from the learnings, a pilot case study had been taken. On the ground, passive interventions were proposed and implemented in the settlement of Bada Ghagra.

SOLUTIONS:
01. Restoring and Reviving Open Dug Wells:
Owing to contamination of surface water and soil storage, the water in the open wells were not used in the settlements. In order to restore and revive these open wells for use, the building of an infiltration dispersion system was suggested. This ensures maximum percolation of incidental rainfall. It also localizes surface runoff into the ground and upper aquifer by developing a recharge pit around existing wells. The recharge pit will protect and develop the edges of the wells to curb the inflow of debris and garbage.

The cost of intervention per well varied from Rs. 25000 to 40000, depending on the well size and local rates.

02. Surface Runoff and Grey Water Management:
Ranchi receives enough rainfall to sustain itself if it is systematically managed. The stormwater can be channelized with diversion channels and dispersion ponds. This can be treated with vegetative swales and vegetated filter strips to allow for the removal of coarse and medium sediments, and percolation of water into the soil strata.
Various factors like the sloping topography of the settlements; existing built drains; contiguous discharge flow; permeability of the soil and the availability of open areas allows for decentralized management of the grey water. A gravity-based cascading system was used to allow greater percolation of water while avoiding contamination. The location and size of the system depended on the length of the drain and the availability of land downstream of the drain catchment. The cascading system consists of trash separator, silt trap, oil/grease trap/ separator and dispersion trench.

03. Blackwater Management:
Blackwater is water from toilets, having faecal content from excreta. One-third of domestic wastewater generated is in the form of black water. Blackwater has a high concentration of nitrogen and nitrates, which percolate quickly through sub-soil and merge in wells and streams. In order to manage black water from toilets, it is recommended that twin pit systems be built for new and existing toilets within the informal settlements. Such twin pit systems should be located at least 18 m from open wells.

For an average family size, one of the twin pits of a twin pit system would take three years to fill. Each system will cost around Rs. 15000.

The key outcomes were as following:

A handbook was made, outlining the steps and processes implemented as part of the pilot project.

A link to the handbook.
The steps and processes outlined in this handbook have been implemented as part of a pilot project in the settlement of Bara Ghagra.

Integrated design is a research-based planning and design practice focused on curating sustainable human and natural habitats. Established in 1993 in Bangalore, the practice has focused on developing an intersectional outlook to engage with evolving concerns defining the natural, human and built environments. As the practice matured, it adopted – and continues to do so- a diverse reading of issues, challenges and imperatives across scales, geographies and pedagogies of engagement. The practice continues to work towards creating an equitable ground interpreting and articulating challenges at the intersection of environment and development.

BASA – AN INITIATIVE TOWARDS COMMUNITY TOURISM