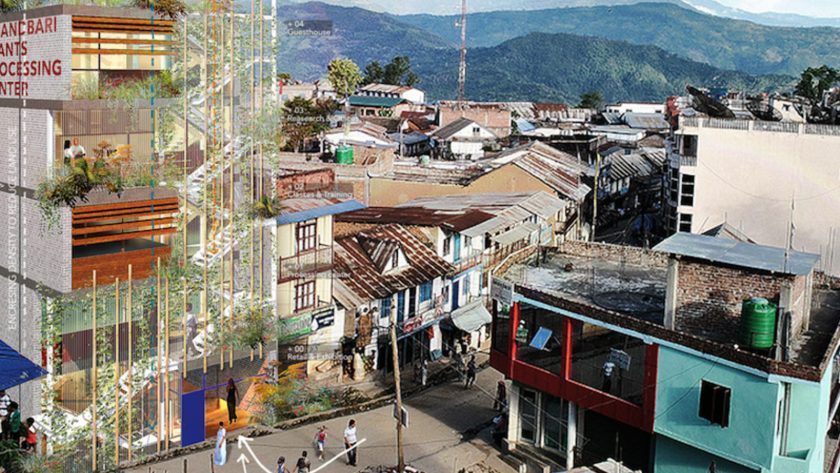 Nepal occupies only 0.09% of the world’s landmass but harbours enormous diversity of flora and fauna due to the extreme changes in topography from the lowland Terai region to the Himalayas. Despite being one of the smallest countries in the world, it is ranked 21st on the global biodiversity index and 11th in Asia.

In response to this crisis and harnessing the potential of the vertical biodiverse landscape, the Vertical University project was born to create a sort of “living classrooms” stretching from Koshi Tappu (220 feet), Nepal’s largest aquatic bird sanctuary, to Mt. Kanchenjunga (28,169 feet), the world’s third tallest peak to teach and conserve the 6,600 flowering plant species, 800 bird species and 180 mammals that are found in eastern Nepal.

While environmental conservation is typically imagined as the creation of protected landscapes and national parks, in a context like Nepal where there is no truly ‘natural’ forest, due to the habitation of forests by indigenous people, farmers are direct monitors of biodiversity, with direct knowledge about species decline, seasonal temperature and rainfall changes, and shifts in water resources.

That is the essence of the ‘Vertical University.’ The “professors” of the vertical university may not have a PhD and in fact, may never have set foot in school, but as indigenous farmers, they possess intricate, intergenerational knowledge about local fauna and flora which is critical for Nepal’s youth to attain.

The vertical university will deepen place-based skills in sustainable technology, craft, and medicinal plants, and seeks to conserve and activate local knowledge while also creating sustainable livelihood opportunities. It does this through establishing “learning grounds,” which are micro-conservation hubs — the “classrooms” of the university throughout different locations across the landscape.

To harness the implementation capacity of the rural youth, BELT fellows program was developed to engage young people from marginalized socio-economic backgrounds who can become the designers, operators, technicians and administrators of the Vertical University Project.

Government school students and teachers (currently including 4 schools in the second node with over 180 students).

Farmers from the catchment areas of the six nodes (over 100 farmers).

Youth from the catchment area (over 30).

We’ve directly engaged over 3000 community stakeholders across the six nodes and perhaps indirectly over 10,000.

From our earlier analysis, a three-prong approach became integral where conservation, education and livelihood are seen as interdependent and deeply integrated into each project and activity KTK-BELT undertakes. The programs have been developed based on the three prongs.

Further south, our Tinjure-Milke-Jaljale (TMJ) conservation project lies in a rhododendron oasis in the middle hills. Our Yangshila conservation project sits in the Siwalik foothills while the Koshi Tappu wetland conservation project drops down to the Terai. KTK-BELT plans to protect the whole range of biological diversity found along this extraordinary gradient from the Terai to the ice-capped peaks through establishing ‘Learning Grounds’ at different elevations. We will achieve this by collaborating with and strengthening our Learning Grounds partners on the ground.

Education impact:
KTK-BELT’s outdoor education program has perhaps been our most successful venture. We called our project a ‘Vertical University’ for a reason. Without rethinking the possibilities of rural education to encompass practical, place-based modules tied to the local landscapes and fauna and flora, Nepal will continue to struggle to keep local youth in the village and the natural environment will continue to be degraded.

What we learned was that the Nepalese curriculum already included many conservation-themed subjects such as climate change, water cycle, and ecosystem services. However, what was missing was specific modules tied to the local village forests, wetlands, and trails. Thus, what KTK-BELT did was design and implement these modules.

In the coming years, we hope to expand the outdoor education program to Koshi Tappu, Kurule-Tenupa, the TMJ rhododendron region, the soon-to-be Lumbasumba Protected Landscape, and Papung high-altitude lake region, which in the aggregate becomes our ‘Vertical University,’ where local farmers, fisherfolk and herders will serve as guest lecturers and the forests and fields will be developed into open classrooms.

The educational infrastructure across the BELT is composed of structures built out of shipping containers, compressed stabilized earth blocks, rammed earth to large learning grounds protecting 100s of different flora and fauna species. Trails that cut across villages are being developed to highlight natural viewpoints, ecosystems, vegetation etc.

Livelihoods Impact:
With a population exceeding 30 million, 85% of whom subsist on agriculture, it is impossible to achieve conservation without considering rural livelihoods. The root cause of logging, sand mining, habitat destruction, ‘dozer terror,’ chemical pesticide use, and illegal trade of wildlife, is the same: the absence of sustainable village livelihoods. This is why one of the three prongs of the KTK-BELT approach is livelihood support, which we achieve through training, seed support, and technology. By investing in agro-forestry, non-timber forest products (such as essential oils and medicinal plants), and eco-tourism, local people will see greater financial gain in preserving nature than destroying it.

Over the course of the last four years, we’ve developed organic farms as research and teaching hubs for agroforestry, permaculture and other sustainable livelihood techniques.

KTK-BELT, INC. is a non-profit organization that is tax-exempt in the United States under the Internal Revenue Code (IRC) Section 501(c)(3). KTK-BELT, INC. was registered in the state of New York on August 7, 2014. It maintains offices in New York and Nepal and complies with laws in both jurisdictions.

KTK-BELT’s mission is to catalyze new models of biodiversity conservation and environmental learning in eastern Nepal. It works with teachers, farmers, youth, and women to create a ‘Vertical University’ that will span from Koshi Tappu Wildlife Sanctuary (67 m.) to Kanchenjunga (8,586 m.), the third tallest peak in the world.

The idea is to give a framework to local farmers to become ‘professors’ of the Vertical University, to share their indigenous knowledge while also physically conserving threatened species and landscapes.

BASA – AN INITIATIVE TOWARDS COMMUNITY TOURISM