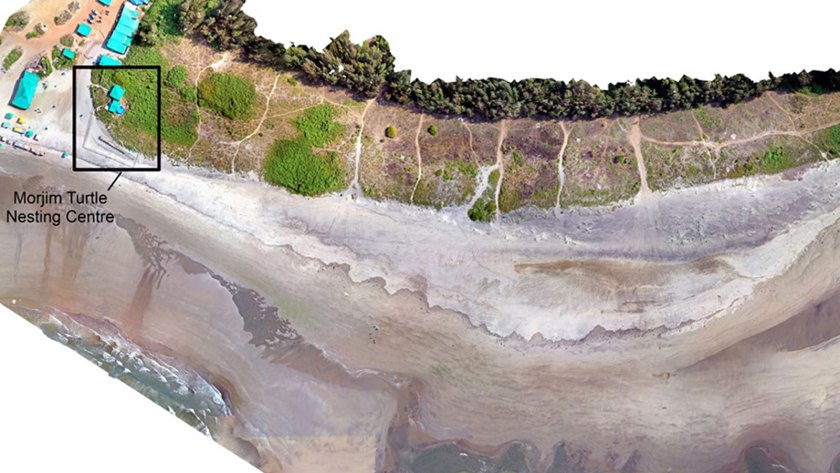 A collaboration across three organisations from three different sectors to demonstrate the use of Unmanned Aerial Vehicles (UAVs) for Olive Ridley turtle conservation.

This project was designed to showcase the use of UAVs for the conservation of Olive ridley turtles (Lepidochelys olivacea) in Goa, India.

Olive Ridley sea turtles are classified as ‘Vulnerable’ on the IUCN Red List primarily because the adult population is declining. Some estimates indicate that the number of baby hatchlings that survive to adulthood can be as low as one in a thousand, while less optimistic estimates indicate that the survival rate could even be as low as one in ten thousand. Females return to the same beach on which they are born to lay their eggs, and thus nesting sites around the world remain largely static. However, human activities can disturb or even harm turtles, reducing the amount of beach real estate available to them for nesting purposes.

In recent years, researchers have been developing methods that use UAVs to document nesting turtles and conduct assessments of their population. Studies conducted by Duke University and the University of Exeter have demonstrated that these methods can be both robust as well as cost-effective. This is of importance in the conservation sector, where resources and time saved can be redirected to other conservation efforts. Population assessments of Olive ridley turtles using UAVs have not been conducted in India so far. In this project, we wanted to test and demonstrate the ability to use UAVs for the conservation of Olive Ridley Turtles in India. To do this, we initiated a collaboration across all three sectors- the Goa Forest Department as a Government of India entity, WWF-India in their capacity as an established conservation NGO and Technology for Wildlife (us) representing the private sector as a conservation enterprise.

Before the implementation of the project, weeks of discussion, coordination and efforts were undertaken between all three parties to ensure a smooth collaboration, and that all legal requirements to carry out the work, in accordance with India’s drone regulations, were fulfilled. Once this was all in place, the fieldwork was executed in the first week of March 2021.

The objective of this project was to acquire aerial imagery and video footage over Morjim beach, which was further processed to create a high-resolution orthomosaic, a 3D model of the beach as well as a 360° aerial panorama. We conducted test transects parallel and perpendicular to the beach. Imagery was captured at a resolution of 2.5 cm/pixel, which previous studies had established as an optimal resolution to detect adult turtles. We also attached a polarising filter to the UAV camera to reduce solar reflection off the sea.

We then flew the UAV in a grid pattern over the beach, with the intention of using these images to create a high resolution ortho-mosaic map as well as a 3D model of the beach topography. Finally, we captured aerial imagery and videos for communication and advocacy purposes.

Field work took place on Morjim Beach, near the turtle interpretation Centre of the Goa Forest Department on a day that turtle hatchlings were to be released. We met with Rajan Halankar, who has worked for 22 years with the Forest Department on turtle conservation in Goa. We were able to document him and the rest of his team examine the nests for signs of hatching. After sunset, they released the hatchlings into the ocean while managing interested tourists and visitors.

The project is self funded by Technology for Wildlife.

Through this project, we were able to collect media and data which can be used to enhance research for Olive Ridley conservation in Goa. The successfully conducted test transects are a starting point for future population surveys using UAVs. These results, along with the media and data collected, can also be used for policy, advocacy, conservation planning and community engagement. Finally, as a successful conservation collaboration between three organisations from the government, non-profit and private enterprise sectors in India, using cutting-edge technology, will only serve to inform and benefit future such initiatives.

Gallery:
Images by Technology for Wildlife | © all rights reserved

About Technology for Wildlife: