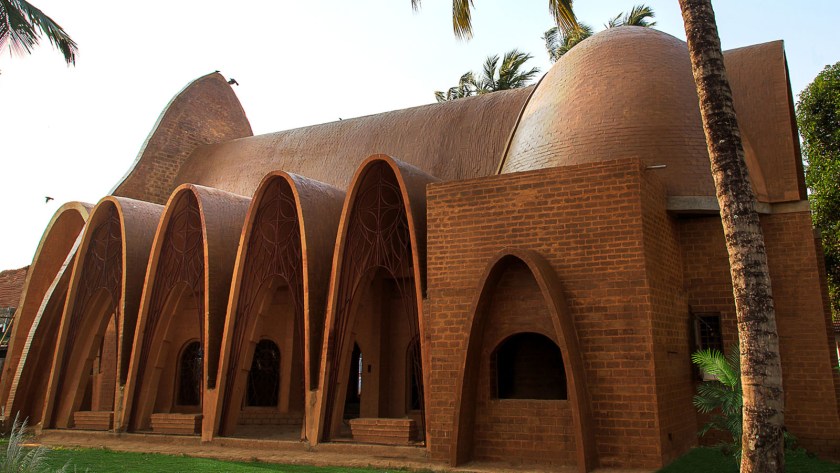 Designed using stabilized earth blocks to form Nubian arches, St George Orthodox Church evolved through a series of dialogues between the masons, architects, clients and an immediate understanding of the site and the surrounding. It resurrects the first church of the Christians in Kerala, built in 1615 AD.

St. George Orthodox Church at Mattanchery was the first church of Christians in the land of spices (Kerala, India) set in A.D.1615. Years of negligence and encroachment left this historic monument in shambles. The head of the Christian sect of Kerala (His Holiness Moran Mar Baselious Marthoma Paulose-II ) took a brave step in rebuilding (keeping the foundation intact) this monument.

Wallmakers, trained by Ar. Satprem Maiini from Auroville Earth Institute, Pondicherry explained to the client the possibilities of earth architecture and the historic importance of arches and vaults in religious edifices. The resulting partnership produced magic aimed at reinstating earth architecture in south India, this was a prime opportunity.

The concept of domes, vaults and arches rose from early symbols of eastern Christianity like the Marthoma cross finally ending in an altar blessed by a “cross of light” a concept by Ar. Tado Ando but in this case by earth bricks, by nature.

The masons received training by the architect himself in building with compressed stabilized earth blocks using ancient Nubian technology of arch and vault building without extensive shuttering (revitalized in early 20th century by Ar. Hassan Fathy).

The project led to the training of various students of architecture who have come to understand the importance of building with earth to have a better future.

With the increasing demand for resources, it is the responsibility of architects to use materials with very little embodied energy. Mud as a material can be expressed in its true form through various methods like earth blocks, rammed earth, wattle and daub and many more.

The exploratory spirit combined with pressing demands our designs are born; which are evolved through a series of dialogues between the masons, architects, clients and an immediate understanding of the site and the surrounding. Rammed earth and compressed earth blocks are dominant materials in the design process.

Costs are too often limited only to a monetary value. Another important aspect is the environmental cost, especially with the embodied energy into the material. The production of earth-based materials consumes much less energy. The initial embodied energy of CSEB is about 4 times less than country fired bricks. Of course the carbon emission is also about 4 times less for the CSEB, compared to the country fired-bricks.

Vinu Daniel completed his B. Arch in 2005 from The College of Engineering, Trivandrum, following which he worked with Auroville Earth Institute for the UNDP (United Nations Development Programme) Post-Tsunami construction. On returning from Pondicherry in 2007 he started ‘Wallmakers’ which was christened thus by others, as the first project was just a compound wall. By 2008 he had received an award for a low cost, eco-friendly house from the ‘Save Periyar’ Pollution Control Committee for the house which was constructed for a cancer patient. Many such eye-openers in the course of his practice prompted him to devote his energies towards the cause of sustainable and cost-effective architecture. With a practice spanning over more than a decade, Wallmakers has won many accolades including being selected by ArchDaily as the only Indian practice in the list of 20 Young Practices of 2020.