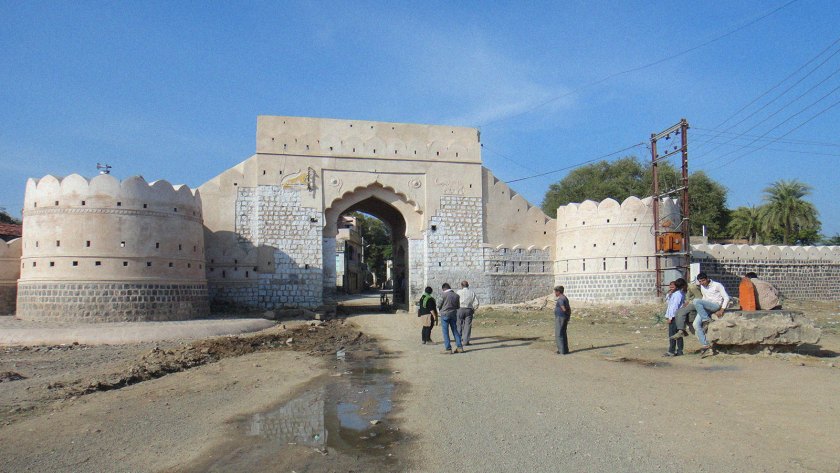 The restoration of the Mahidpur Fort is a collaboration between government agencies, local community, ATA and World Monuments Fund. The site is an example of plural identities and syncretic culture, receiving the UNESCO Asia Pacific Award for Cultural Heritage Conservation in 2016.

The Mahidpur Fort, popularly known as Quila Mahidpur is an unprotected monument on the banks of the River Kshipra, within the rural hinterland of Central India at Mahidpur, District Ujjain, Madhya Pradesh, India. WMF New York provided technical support for the preparation of conservation plans, training and capacity building, and the Government of Madhya Pradesh was committed to undertake the expenditure towards implementation of the conservation works. The implementation of the project has been a collaborative effort by the Department of State Archaeology, Government of Madhya Pradesh, Nagar Palika (Municipality) Mahidpur, Office of the District Collector of Mahidpur and the local community (owners and occupiers of the Fort).

Situated on an ancient trade route of Dakshinapath, the site has a high degree of archaeological potential for remains from the Chalcolithic period, excavations were undertaken in the 1990s by the Archaeological Survey of India had revealed the presence of red and black pottery from the Malwa period. Furthermore, the Fort has been the physical witness to the Third Anglo Maratha War in 1818 that was fought between the armies of the Holkars (Marathas) and the British under Col Thomas Hislop & Sir John Malcolm. This battle became conclusive for the subjugation of Central India by the British. The Fort bears the physical remains of this battle in the form of the battlements and repairs as well as reconstruction taking place in brick masonry. Of value is the urban and architectural setting of the Fort, river and ruins which are a good example of the military architecture of the Holkar Marathas in the 18th century. The site is also an example of the plural identities and syncretic culture, it has mythological and multiple religious importance to the Hindu and Jain community located within a dense Muslim rural community. Within the Fort are located two historic temples dedicated to Lord Shiva, two contemporary mosques as well as a very significant Jain Temple and it is believed to be the site of the sacred forest of Mahakal as per Hindu mythology.

The Fort of Mahidpur covers an area of 1,23,240 sq meters, the cultural resources include a fortified citadel punctuated by six entrance gateways, ghats along the river edge, two historic temples, ruins of the citadel as well as the remains of a fortification wall on the southern side. Initiated in December 2012, the restoration project involved the tasks of documenting the cultural resource, assessment of the condition and planning for heritage conservation works as well as developing a conservation management plan and monitoring the implementation of selected conservation projects to completion over 3 years.

The remote location of the site made it critical that locally available masons and craftsmen were employed in the restoration project, engaging with the local community and providing training, capacity building and employment was an integral component of the project. The technical support from World Monuments Fund, New York created for the first time in India a sustainable practice of peer review and collaborations by adopting a multi-disciplinary approach.

The restoration project was one of the 43 public-private partnership projects executed as per the Memorandum of Understanding between World Monuments Fund New York and the Department of Archaeology, Government of Madhya Pradesh.

Office of the District Collector of Mahidpur

Local community (owners and occupiers of the Fort)

The conservation plan prepared for the cultural resource aimed to address the concerns of preservation, conservation and presentation of the above and below-ground remains of the Maratha Fort which was in a poor state of conservation. Much of the physical remains of the walls and defences were not surviving above ground, whatever did survive above the ground was fragmentary and had lost cohesion. The fortification walls and gateways form the iconic image of the Quila Mahidpur and their restoration has reinforced the identity of the settlement in the rural hinterland. The objective of the project was to improve local understanding of the walls and their significance, promotion of the recognition and protection of the walls, sensitive repair and conservation of the walls, protection of the setting from encroachments and adjacent developments as well as improving access to the walls as well to recognise the significance of Mahidpur Fort in the overall continuum of the community, region and country.

The conservation work was based on optimising the cultural resource, addressing what remained, what needed to be worked on and what needed to be done to improve the condition. The funds allocated towards the Restoration of Mahidpur Fort were a total of INR 1 Crore (Approximately US$ 150,000). Further to the thorough documentation of the entire cultural resource, including measured drawings, mapping of condition, materials and historic layering as well as detailed inventories, the restoration of the fortification walls and bastions and the two gateways were prioritised within the available resources. The majority of the work undertaken on the Mahidpur Fort involved the structural consolidation of the walls and bastions, provision of plinth protection, consolidation of broken or severely damaged portions by rebuilding and restoration of the original lime plaster as well as restoration of the two gateways into the citadel including careful restoration of the original timber gateway.

The physical restoration of the walls, bastions and gateways reinforced a sense of pride and identity of the community living inside the Fort. When the project was completed, a villager from the community thanked the team for restoring the gateway through which they welcomed the wedding procession (baraat) for one of the girls in the village, which enhanced their social status. The project received the UNESCO Asia Pacific Award for Cultural Heritage Conservation (Award of Merit) in 2016. The project inspired other communities in the vicinity to request the State Government for restoration of other historic edifices within their surroundings; built heritage was therefore becoming a tool for building identity and social cohesion within rural communities.

Our expertise lies in urban conservation and regeneration, building restoration and architectural design. We believe design is evolutionary and it remains the core of our practice. We engage with design in all its forms whether it is an intervention at an urban level to designing the pattern of a tile, each element of our projects are well researched, documented and implemented. We pay special attention to detail and execution to ensure that our vision is translated on the ground with minimal deviation. Our work philosophy is hinged on multidisciplinary methodology, we engage with historians, geographers, interpretation planners, graphic designers, engineers and craftsmen at many levels. The practice has completed a wide range of conservation plans, design interventions and feasibility studies for projects of a variety of scales such as havelis, forts, temples and entire colonial settlements.

ATA is headed by award-winning architect Aishwarya Tipnis. Her deep understanding of the Indian context coupled with her training in Britain enables her to develop bespoke solutions that are both global in approach and apt in the local context. She has over a decade of experience in the field of architectural and urban conservation and has pioneered several urban conservation and building restoration projects in India.