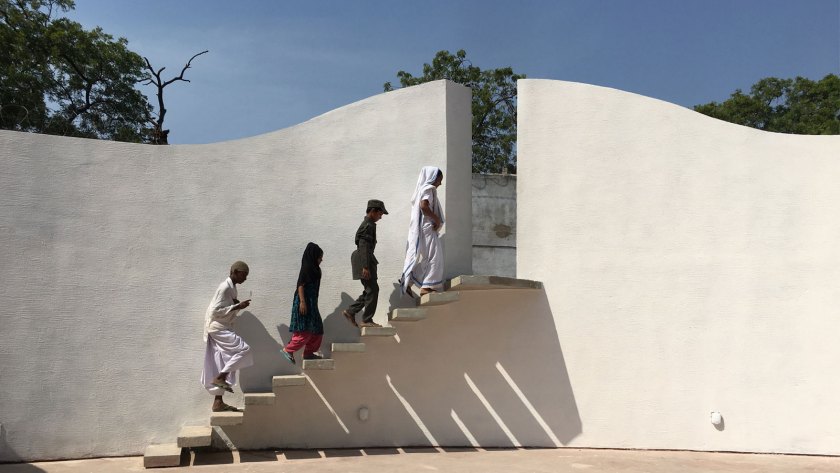 Since its inauguration, artists, performers, teachers have conducted lectures, events, and workshops. Children from ashram as well as other communities across Ahmedabad have benefited from these events. Jagat theatre has become a place for all. A place for expression and togetherness.

Sabarmati Ashram, in Ahmedabad, is home to more than a thousand children, who live or study here[1]. Gandhiji’s strong vision on education – development of mind, body, and spirit – is still practised today. Arts, particularly performing arts, are an important component of this holistic education. Since the students did not have a dedicated place for regular practices or performances, they travelled long distances to various theatres in the city, to practice or for special events. Jai Jagat theatre was conceived as a gift to the children of Ashram and neighbouring communities. The theatre was built in 2017 as the centenary celebration of Sabarmati Ashram.

Jai Jagat theatre is located in a peaceful corner of the precinct. The site is marked by old neem trees, and simple grounded structures – Bal mandir (Madame Montessori school), a primary school, teachers training college, and a central kitchen. The design of the theatre aimed to preserve the character of the space. A silent corner, invisible from the entrance, was chosen as a site to build the theatre. A meandering brick pathway under the trees leads to the site and was designed as a place where students can meet, be alone, rest or work. This pathway terminates at a large gathering space marked by a tall neem tree, where the theatre reveals itself. This empty space is free from a defined function which makes it the most essential space. It is a place for performance, a place to meet, to learn, to pray, or to rest. Peter Brooks says, “I can take any empty space and call it a bare stage. A man walks across this empty space whilst someone else is watching him, and this is all that is needed for an act of the theatre to be engaged”.

From this empty space, a white wall with a single opening creates curiosity. A narrow ramp, with a spiral movement, shifts the ground level and brings to a partially sunken space – a formal place for performances. During this movement, various elements are revealed one after the other- a balcony, a ceremonial stair, openings, the stage, and seating. Large openings establish the relationship with the outside – with Madame Montessori school, a water tank, and surrounding trees. Smaller openings and balconies support the performances and are designed with the scale of children. A water harvesting tank beneath the stage of 75,000 litres capacity helps irrigate the surrounding landscape.

When the theatre is occupied by people, it gains meaning, the white wall becomes a backdrop to life and nature. Architecture becomes a part of the performance. The theatre was inaugurated on 2nd October 2017. The first performance was about the life of Mahatma Gandhi, performed by the children of Ashram and neighbouring communities. It was a joyous moment.


[1] This historic place was established by Mahatma Gandhi in 1917 and became the base for the struggle for Indian independence.

The project started with the aim to build an amphitheatre for the children. The rigorous study of the place, not limited to its architecture, helped to expand the project. The process delved into the history, social, and cultural aspects of the place. Speculative drawings helped to understand the evolution of urban form and its terrain. Public gathering spaces of different scales were developed around the theatre. These spaces are used as leisure spaces by the people of the ashram. It is quiet and submerged in nature. When there are no performances, the theatre transforms into a lively playground for children, a private study space, or a peaceful meeting space for grandmothers of the ashram.

SEALAB was born out of common interest to design with time and quality and reflect on the social and cultural implications of Architecture. Currently SEALAB is based in Ahmedabad and led by Anand Sonecha.