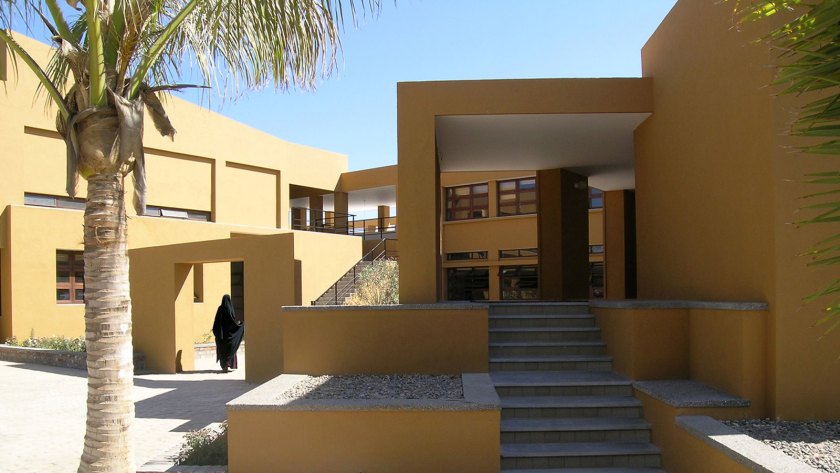 The campus is an attempt to evoke the vernacular desert archetype through massive, continuous shielding ochre-coloured walls, controlled openings, the deeply shaded courtyard, and the wind towers.

The Shrujan campus is situated in Bhujodi 10 km from the city of Bhuj in Kutch. In contrast to the arid desert vegetation around, one encounters a well-tended orchard with varied fruit trees reminiscent of the ‘wadis’ or the orchards in the south-western region of Kutch.

The client brief demanded a sustainable architectural response taking into account seismic stability and the harsh desert climate. The building is designed as a combination of moment-resisting frames and shear walls in RCC and brick masonry and was detailed as per code provisions outlined in IS 13920-1993 for ductility and seismic resistance. A three-chambered rainwater harvesting tank was built in the main courtyard capable of storing 100,000 litres of rainwater, channelled through a carefully worked out system. This tank is connected to another tank that stores water from the bore well. Recharge wells located in the parking area and the lower courtyard prevent runoff.

The program incorporates an expressive public face with its main retail store, visitor’s lounge, an exhibition gallery, as well as internal workshop areas, textile design cell, offices, textile conservation cell, auditorium space, and residential quarters. A ramped corridor links the entrance to the visitor lounge, the workshops and the café, on the ground level.

The two overriding features of the plan are the inward-looking courtyard and the enclosing walls with the wind towers on the south and the west. The protective walled enclosures on the heat gain side, contrast with this open courtyard that coalesces views and movement in its shaded precincts. Workshop areas that require even daylight open towards the court with large continuous bay windows towards the north. Circulation is both through and around the court. The courtyard also offers a dynamic release of space at the corner on a diagonal axis to the main entrance signified by tiered plinths and a short flight of steps to access the retail store. The courtyard is designed as a multifunctional space, capable of informal congregations as well as quiet moments of repose for an individual.

Light in all its modulations was a constant concern, brought in through recessed openings and bounced off gently curving or sloping roof profiles. Space is modulated in its proportions as one moves through the building, providing vignettes of the courtyard and the sky. The resultant architectural form is a layering of contrasting elements. The sense of contrast is carried into the choice of materials and textures within the building. Rough pebblecrete of the copings and the plinth contrast with the ochre painted walls. All exterior areas are paved in exposed brick, and rough Kota stone continuing into the courtyard.

Harnessing the prevailing breezes and shielding the work areas from the harsh light and heat was essential to the organization of the plan. The principal idea of wind catchers oriented towards the south and west directions create a passive cooling mechanism that works for all the major spaces. Small exhausts mounted in the circular barrel openings on opposite walls induce the required air changes for comfort. The wind scoops were designed to also act as structural anchors for the building, capable of taking lateral forces and counter seismic movement. The architectural program required the spaces to flow continuously around the central north-facing courtyard. The structural resolution came about by way of expansion joints starting above the grade slab level, separating the building into four zones.

The flagship store for its products was incorporated in an attempt to create a new face for Shrujan and provide a marketing platform for its wholesale international clientele.

Shrujan is a non-governmental organization working in the field of women’s self-employment programs through the revival and development of traditional embroidery crafts since 1969, based in the Kutch region of Gujarat State in Western India.  Founded by Chanda Shroff this NGO has worked tirelessly in the region.(more on  https://shrujan.org/the-shrujan-story/). This project was funded by grants from the companies of the Excel Group and The Shrujan Trust.

Shrujan’s initiative to set up this project reiterates its institutional presence in Bhujodi Kutch. It has since become the main geographical placemark for 2500 + artisans that it involves in its fold. It also spurred the making of other artisan centers around the Bhujodi area by locals and several other NGO’s. The flagship store at Shrujan, generates sales revenues for crafts that support several artisan groups. While its architectural presence cannot be underplayed, several students of crafts and architecture visit Bhujodi annually. The founder Chanda Shroff who was awarded the Rolex Prize for Enterprise operated from this campus reaching out far and wide to her associates and artisans.

Indigo architects is a collaborative studio practice, headed by Mausami and Uday Andhare, supported by a team of young professionals. We follow an integrated design approach incorporating architectural design, landscape planning and interior design into its fold. The design process seeks to resolve the various paradoxes between client needs and affordability, site conditions and programmatic dictates through intensive analyses, explorations, study models and sketches.