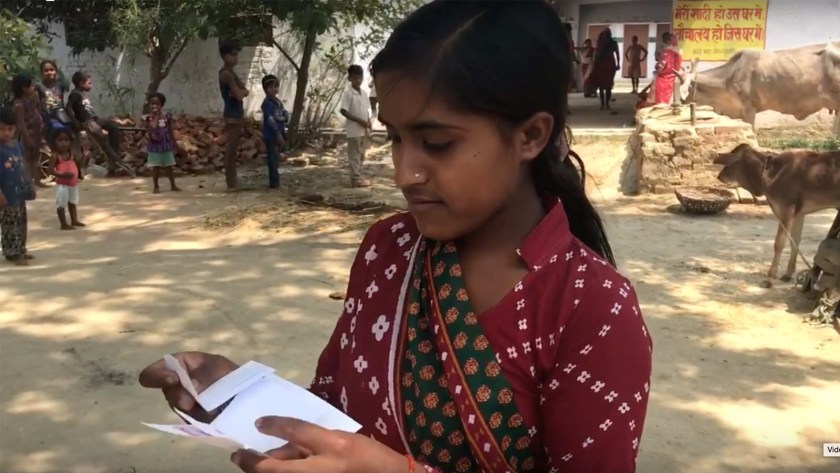 30/01/2022 kokum .co Communication Design, Health and Well Being Comments Off on CREATING GAMES TO SHIFT ATTITUDES AMONGST ADOLESCENT GIRLS IN RURAL UP

Menstruation is considered shameful and spoken about in hushed tones in India. To address this, Kaboom and Breakthrough India partnered to find ways to reach out to adolescent girls in rural Uttar Pradesh to increase knowledge and shift attitudes positively around menstruation.

Menstruation is considered shameful and spoken about in hushed tones. The stigma around the subject continues to ensure it remains under the cover. Young girls, women and even older women find it difficult to talk about it because of the shame attached to it. Initial research from the intervention areas served as our assumptions. Some highlights of the research were:

To further understand and challenge these assumptions, a human-centred research methodology had to be adopted and Breakthrough was equally invested in this approach.

Kaboom adopted a user-centred approach to understanding the challenges on the ground, the societal and familial structures, a day in the lives of the girls in order to identify not just the knowledge but the attitude towards menstruation amongst girls and women.

Taking cognisance that there are personal, regional, ethnographic and age-based differences in how one perceives menstruation, we arrived at the following design problem:

·  How might we educate adolescent girls on menstruation, addressing the feeling of it being dirty/disgusting and shameful through active gameplay?

With all this information about the target areas and the population there, we customised design tools to conduct the research on the ground. We found the intensity of fear and shame around menstruation in these areas was very high. It became important that we understand what triggered these feelings.

Through the various activities we did with the adolescent girls we understood that periods were constantly referred to as a problem, period blood was considered impure. And period as a whole was viewed as disgusting because that is what they were told.

We were able to clearly isolate the top design challenge – to turn the emotion of disgust into a positive emotion of periods being normal and healthy. The fact that the girls did not have a positive vocabulary to say period or that most of them had never said the word aloud meant that the first step was to get them to do just that.

At Kaboom, whenever we use a play-based approach it is clear that the games we design has to be entertaining and the gameplay has to be easy. Without the “fun” element we lose engagement and the whole participatory process, as well as the gameplay itself, is compromised. The message has to be embedded within the game but what is important is that the game works as seamlessly as once the user is used to playing.

We also had to take into account that the users belonged to lower economic groups where their reading abilities were low, many of them could not write properly and they weren’t comfortable drawing. But the girls were physically active and enjoyed playing games that were outdoorsy and involved physical activity.

During the days we spent with the girls we created basic prototypes of several games to learn what works and what doesn’t. Any game that required them to sit and play was a miss. The game had to involve a lot of physical activity. Eventually, we returned to the studio with the knowledge that in the absence of a trainer, if we wanted the girls to play, the games needed to stem from games they knew well.

At the heart of this process was co-creation. We knew from the start that the girls and women had to help us identify the real problem and we had to co-create a solution with them. The process adopted was participatory and allowed us to co-create content that ensures quick uptake from the user. In this journey, we narrowed down the user group to adolescent girls (11-19 years old) in rural UP. The final game created is loosely based on the popular game “pithoo” with one clear objective – that the girls had to scream out the word mahavari (period) loudly to win it. The objective was to introduce positive language to their vocabulary and help remove the emotion of disgust that held them back from even discussing the issue.

Kaboom challenges norms and smashes taboos to rewrite narratives and create new ways of looking at society. In order to rewrite these narratives we work with our clients to build: a shared sense of ownership and commitment to social change by co-creating ‘living narratives’, people-powered initiatives to engage, activate and empower individuals and communities and building social movements using the power of storytelling and social networking that focus on actions leading to change.

Kaboom’s approach is robust and deeply rooted in evidence from the field applying principles of design thinking and participatory methodologies with a strategy that is impact-driven. We design programs and products keeping the ‘user’ or ‘audience’ at the centre and focus as much on dissemination as production by engaging a large and varied set of stakeholders and partners.