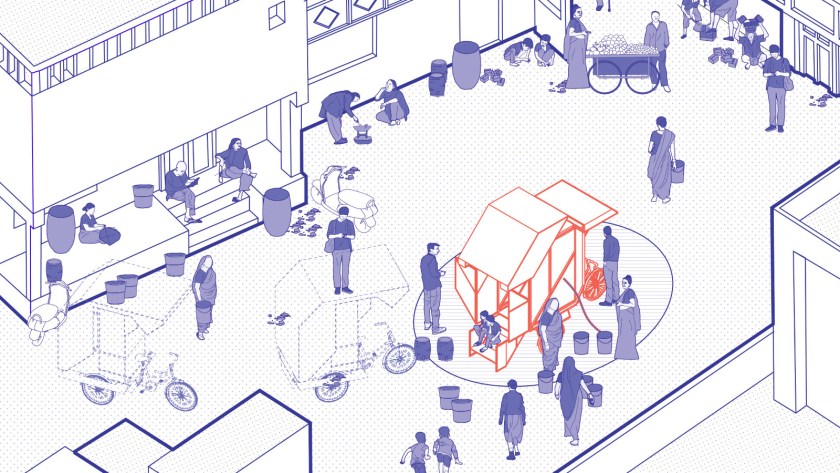 12/11/2021 kokum .co Architecture and Urban Design, Clean Water and Sanitation, Health and Well Being Comments Off on PAANI LARI

Paani Lari is a nomadic public architecture conceptualised to resolve issues of public health, specifically those related to contaminated water by the agency of community management.

In a nutshell, we developed a movable water-filtering unit. A nomadic public architecture that provides a fundamental service and incorporates diverse pedagogical and community functions; a counterintuitive and frugal response to large-scale issues common to informal settlements in India, yet based on a thorough study of the place. Accordingly, in order to understand the ‘Paani Lari’ (water cart), we need to understand its context: the neighbourhood of New Faisalnagar in Ahmedabad, India.

Although the site was originally a farming field, New Faisalnagar as part of what is called the ‘Bombay Hotel’ area began to urbanize quite rapidly due to the Urban Land Ceiling Act of 1976. A policy that indirectly incentivized developers to purchase low-priced farmland in an accelerated and ad-hoc manner, who subsequently divided and re-sold them informally to low-income families, without ensuring or organizing basic infrastructural amenities. The settlers of what is now New Faisalnagar were majorly Muslim families that were either directly displaced by the communal riots of 1969, 1980, 1990 and 2002, or indirectly affected by them by migrating in order to seek safety and housing affordability. Being located south of the walled city of old Ahmedabad and between the Pirana dumping ground, several textile and chemical industries, and the Chandola Lake. New Faisalnagar is now set in a marginal condition that has isolated its community for quite some time, due to its exclusion from any town planning schemes or urban development policies. A consequence of disenfranchising political agendas manifested in the materialization of the city, which have made this settlement a textbook example of infrastructural violence.

Until very recently, the AMC (Ahmedabad Municipal Corporation) did not recognize most of the propriety rights of the residents and hence did not deem imperative the provision of basic amenities and infrastructures. This clearly encouraged the emergence of informal service providers who monopolized water provision, electricity, and drainage, outside of the state’s purview yet accounting for very valuable conditions of self-organization and self-management. A system in which the Paani Lari geared, as a way to capitalize on existing dynamics to resolve issues of public health, specifically those related to contaminated water by the agency of community management.

Although water connection is currently being provided to most of the neighbourhood, and the endowment of infrastructure has slowly become more present, the people of New Faisalnagar still face a great number of challenges and difficulties. Therefore, the community continues to devise interesting alternatives of infrastructural construction, in which we seek to participate through the treatment of water. This particular service is meant to function by virtue of local political networks and depend on radically singular interactions, wherein everyday citizens can actively participate through the shifting power structures of unofficial governance. The impact of this public water-filtering system moves beyond the straightforward response to issues of public health but transcends on to notions of public participation and collective organization.

Nevertheless, it is important to highlight the fact that the main aim of the project is to address immediate conditions of water purification on an everyday basis. In that manner, the impact is also partly economic given that is making more accessible a service which otherwise is unaffordable in the neighbourhood and partly in terms of welfare. Since the local industry-polluted, borewell water is ought to be purified for general consumption.

Additionally, the aim of the project is for the device to double as a platform for public pedagogy, exhibitions, and gatherings, therefore seeking to impact the context in a parallel manner from a cultural perspective.

Chaal.Chaal.Agency does not claim to be a humanitarian organization. It is a design-research collaborative project, specialized in experimental infrastructures implemented through the identification and alliance with figures of community leadership. In the particular case of Paani Lari, we collaborated with key residents of New Faisalnagar who not only helped us in the understanding of the site´s complexity, but also aided us in the outlining of possible interventions, and the identification of agencies with potential responsibilities. In close alliance with several CEPT University students from the Bachelors of Urban Design Programme, we proceeded to crowdfund and construct the device as a pedagogic experiment in itself.

Our strategy was to collaborate with a local NGO called CFD (Centre for Development) in order to concede ownership to a group of citizens in the community, who were willing to drive the device and cater to approximately 40 families per day. Additionally, given that this is also meant to be a community space through the different elements that encourage exchange and dialogue -the deployable staircase, roof, and panels- we foresee it as a platform through which educational campaigns can be structured in a mobile manner.