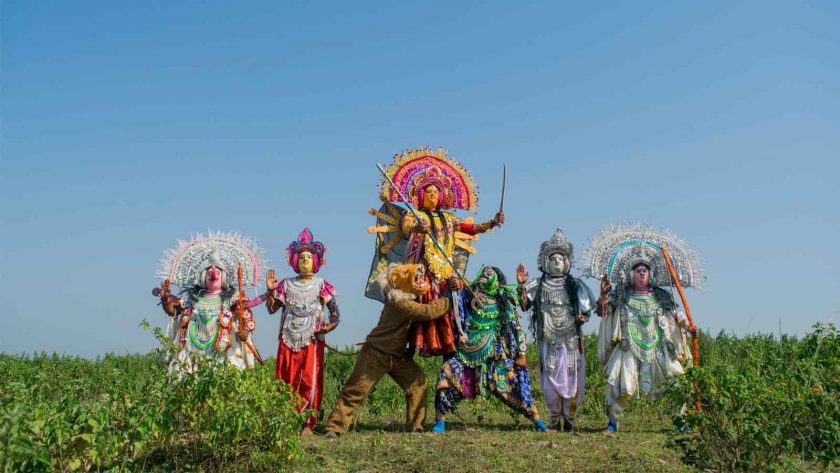 Art for Life is the flagship programme of Banglanatak Dot Com, for inclusive and pro-poor growth in rural India, using cultural capital as a means of sustainable development. This program covers 30,000 rural artists and 30 art forms across three states of India.

Even though India is a rising economic power, it still faces the grave problem of providing employment opportunities to youth, especially in rural areas. According to the Centre for Monitoring of Indian Economy, rural unemployment has steadily risen from a low of around 2.8% in August 2017 to around 7.6% in March 2020, even before the COVID-19 lockdown and pandemic impact started coming to the forefront. Rural India has been usually associated with under-development, backwardness and poverty. However, the rich traditional cultural assets of the highly skilled rural communities and the opportunities that lie therein have been ignored for sustainable economic growth in our country.

Banglanatak Dot Com undertook an experimental project in 2004 with some selected traditional practitioner communities of rural Bengal. The project covered 3200 folk artists across 6 districts. The idea was to professionalize these traditional skills, hone the practitioners to make them market-ready, and develop rural micro-enterprises based on those skills.

This project aligned with the increasing global dialogue about the power of culture as an enabler and driver of sustainable development, where a paradigm shift was emerging in development strategies – moving away from industrial/ production intensive models to human-centred sustainable approaches, also articulated in the 2030 Sustainable Development Goals.

From an experimental pilot project, Art for Life (AFL) over a period of 15 years became an evidence-based successful model, recognized by UNESCO, UNWTO and State Governments of West Bengal, Bihar and Rajasthan. This program covers 30,000 rural artists and 30 art forms across three states of India.

UNESCO is a national partner of Banglanatak dot com for the AFL model.

European Union had supported it in its initial development phase.

UNWTO endorsed this model focusing on Culture based Tourism in 2015.

The Department of Micro, Small and Medium Enterprises, Government of West Bengal, the Eastern Zonal Cultural Centre, Ministry of Culture (GoI), the Planning Commission of India, the Bihar State Livelihood Mission, the Department of Tourism, Government of Rajasthan have adopted the model and has supported AFL programmes.

Government bodies such as MSME, WBKVIB, Tourism, Handicrafts, etc. are roped in to facilitate access to relevant schemes of the government as well as for support towards infrastructure.

The strategy undertaken is always participatory where communities themselves are the primary stakeholders in the process of development.

Global partnerships with UNESCO, UNWTO, ICHCAP constitute a major step in advocacy, promotion and recognition of success stories contributing to the SDGs.

The positivity in collective collaboration was reflected in overall village-level development and led to social inclusion: women’s mobility and decision-making power improved, children started going to school and education became important, sanitation and infrastructure improved through a partnership with local government.

Specifically, between 2005 –2019, the number of practising artists across Bengal doubled within these communities, while average income grew three times.

The number of artists earning more than 200 USD per month became 26% where previously their income from art was nil.

More than 90% of artists have a bank account, more than 50% have a new/renovated house, 77% of these have sanitation and 100% artists’ houses are electrified; 30% are digitally active and increasingly the next generation is being involved in the art form.

Banglanatak Dot Com is the umbrella brand shared by i-land informatics Ltd – a Company and Contact Base – a Society. We are a social enterprise, set up in 2000, working across India with a mission to foster pro-poor growth and protect and uphold the rights of women, children and indigenous communities.

We specialize in communication for development (C4D) using theatre and developing community-led creative industries based on intangible cultural heritage like performing arts and crafts.

We have a 100-plus member team with backgrounds in Engineering, Management, Sociology, Theatre, Media and Literature.