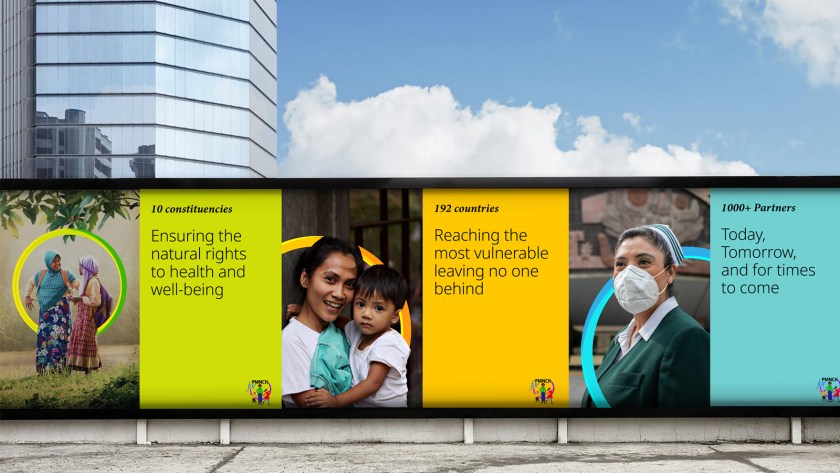 10/12/2021 kokum .co Communication Design, Gender Equality, Health and Well Being Comments Off on A NEW VOICE FOR PMNCH

Lopez Design submitted an article a year ago on branding for Partnership for Maternal, Newborn & Child Health for the social design library. It now has a new voice, identity and bigger partnership. We look into how it became a guiding force for the studio and the clients.

Following the Partners’ Forum of 2018, there was a lot of excitement about the ‘Pipli’ identity we had created for the conference. It was colourful, humanistic, variable and attended to six different sectors, bringing the missions of the constituencies alive. At the same time, it brought out the power of partnership in a very tactile and memorable way. This identity was a huge turning point for how PMNCH could project itself. It also allowed the organization to make the often mundane-appearing tasks into vibrant communications that could enthuse stakeholders to act. When we were commissioned to do the new identity, the Partners’ Forum logo became a guiding force for our clients and us.

A new identity for a new focus

PMNCH wanted a new identity that would align with their 2021-25 strategy. Over fifteen years since their inception, their focus had shifted from maternal, newborn, and child health to women, children, and adolescents’ health and well-being. Further, their 2021-25 strategy placed great emphasis on their evidence-based advocacy, which is core to how PMNCH now operate. Therefore, the new identity had to bring out this voice of the partners as a committed group that actively advocates for change.

The distinguishing features of PMNCH Partnership / How PMNCH stands out

Several unique assets make PMNCH stand out in the non-profit healthcare landscape. First, they are the most significant partnership, with over 1000 partners from 192 countries. Second, they have been well-recognized over the years for their work and broad reach. Third, they are powerful influencers known for reaching out to Heads of State and funding organizations. Finally, they saw themselves as having a stance of elegant advocacy — they were persuasive changemakers versus activists who shout out loud.

The challenges of a large partnership

The PMNCH Secretariat comprises a group of highly qualified professionals, diplomats and country heads who voluntarily give their time in the partnership’s interests. This organization brings together partners of varying strengths. Each organization also has its own goals. PMNCH sees its partnership as a conduit for aiding all of its partners to reach their goals through its mission: to mobilize, align and amplify the voices of partners to advocate for women’s, children’s and adolescents’ health and well-being, particularly the most vulnerable.

PMNCH’s functional map was pretty complex. As a result, the partnership was often perceived as a laborious machine with ten constituencies and multiple operations. This perception had to be mitigated and made approachable.

One of the complaints smaller partners of PMNCH had was how language often created a barrier. To overcome this, our identity systems emphasized iconic visual characters. We also introduced variations on the PMNCH for text-only variation, accommodating variations where we could have different endings to the for such as PMNCH for women, children and adolescents, PMNCH/ Partners for change, and so on. The placement of the circle, the PMNCH for and the text also allow a double reading to see it as PMNCH for change and Partners for change. We also provided PMNCH with a cohesive system of characters and four colour palettes — three for their key focus areas SRHR, Adolescents and Women and children, and one primary palette for general use. This clever colour coding allows the brand to deftly use visual stimulus to create subliminal messaging to its audience. Beyond providing the palette, we also had to think about making it easy for the users to pick colours; to this end, we gave names to each hue of the colour palettes so that decision making about the colour choices identified with emotions and feelings.

We set out to bring in the characters of a woman, child and adolescent as positive and independent, empowered by the partnership. The final logo has a circular ring that embraces the characters, the PMNCH acronym and the word for; PMNCH for is contained within the circle. The preposition ‘for’ was introduced to give an incomplete sense of that active advocacy stance. Leaving it hanging involves the viewer and stakeholder to create and complete.

The project was funded by the PMNCH body.

We ended up creating a complete PMNCH Pictionary where the characters came alive in many roles, in many colours and representing cultures and people across the world. This truly democratic branding system allowed people worldwide to have pride of place. Moreover, it thrust the vulnerable into places of power by giving them all representation on the same footing.

Overall, the identity and branding system maximizes the applications for a digital brand, a brand that can truly use the digital space by opening up visual language, not restricting itself to a mere logo. We created an extensive set of icons with 226 characters and more than 65 environment elements, a new language for PMNCH, which they will have to study, learn, adapt to and speak.

Our multidisciplinary design firm specialises in branding and communications. We use market study, research and collaboration to develop insightful strategies that create value and transform brands.