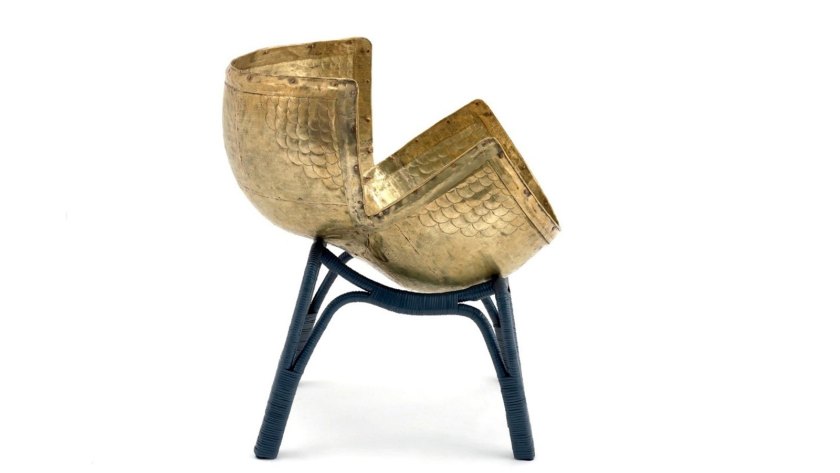 Pitoloi is a result of trying to create everyday utilitarian furniture pieces using the ancient craft. It is unique in typology, aesthetics and sensorial qualities.

Like many other artisanal communities in India, livelihood of the Moriya community fully depends on their hand skills. However, this traditional practice is in a dire situation for several reasons. The primary issue is that artisans have been making the same products for the local market and there has been almost no design intervention to update the products. Other issues artisans face include increased cost of raw materials, competition from low-cost mass production, poor financial conditions of the artisans, inadequate government support and lack of awareness. To keep the product cost minimal, the artisans are paid a very low daily wage, which is why the new generation is not willing to practice the craft by choice.

Pitoloi is an ongoing project that started in the end of 2013 as a part of the graduation project of Ranjan Bordoloi at the department of design (IIT Guwahati), a continuous collaboration between the designer and the artisans of Moriya community of Hajo, Assam. The intention of the graduation project was to revive the dying traditional crafts of Assam through making high quality contemporary objects of daily use. The first piece was a chair with a hammered brass seat and legs of rattan, followed by collections of metal tables and stools.

Basic hand tools are used to cut sheets of brass metal, which are given shape by heating followed by beating continuously with different kinds of hammer against wooden moulds and metal tools until the desired shapes are formed. The small parts are then joined together based on the design with an ancient floor-based coal-welding technique. Once the desired forms are achieved, they go to the next stage: cleaning and polishing.

Although some extreme industrial typologies were explored, respecting the existing ways of making facilitated easier communication between the designer and the artisan to push the limits of production to its extreme. The result is unique in typology, aesthetics and sensorial qualities.

The project is self-funded by the studio.

Moriya community of Hajo, Assam
The studio has worked with organisations like Godrej Design Lab, Cappellini, NIFT, Create-Culture UK and Vayu Design For Living among others.

Currently, only 6 artisans are engaged in the project with Mr Emam Ali as the master artisan. Pitoloi hopes to encourage more artisans from the community to get engaged by refining their skills, making objects of better value for a market that would pay better and creating better financial situations to uplift their craft and livelihood.

The prototype of the project, Pitoloi chair won a student award called “The Park Elle Decor

Student 2015”  in the category of the best use of traditional materials. As a part of the award, the chair was showcased at ‘India Design ID, 2015’, and caught the attention of Giulio Cappellini. It was offered to be a part of the project ‘Cappellini Next 2015’  at the Salone Internazionale Del Mobile, Milano.

This global exposure at a young age inspired Ranjan to start Amiya Lab. The products of the project have been showcased on multiple platforms such as London Design Festival, India Design ID, Red Dot Design Museum Singapore, Ambiente Frankfurt and Raw Collaborative, among others.

Pitoloi stools have been awarded the Red Dot Design Concept award: best of the best and EDIDA India, in the furniture category.

The studio is primarily interested in design as a cultural practice through exploring subjects like a sustainable way of living, innovative use of materials & techniques (both traditional craftsmanship and industrial production), and conscious consumption through an approach of essentialism. With its collaborative approaches, the studio aims to work with organisations that are in alignment with the Lab’s approach to design.

Currently, the focus of the studio is to create meaningful and delightful experiences with a core interest in functional aesthetics. Every project of the lab has different contexts and constraints.