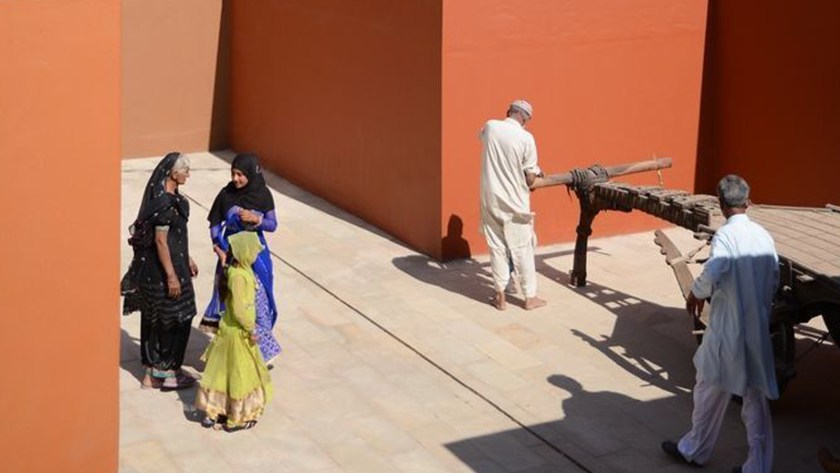 LLDC is a step to revive, document and showcase traditional crafts of Kutch post-2001 earthquake.

The 2001 earthquake in Kutch destroyed the built habitat across the region resulting in loss of human lives and livelihoods. There was an extraordinary pouring of help – monetary, emotive, genuine and also otherwise. The tax sops offered to industry by the government to set up shops almost immediately started to change the landscape. The indigenous craft was under a serious threat. Native artistic skills were being lost to jobs offered by industry. A dangerous trend that had begun to take shape slowly, ensuring that an entire generation and its skillset would be lost.

In the wake of this, Shrujan, an NGO based in Kutch led by Chanda Shroff, began the initiative to restore the livelihood of the people and the Living and Learning Design Center (LLDC) was conceived as a project. It was meant to be a ‘place’ that would become a tactile and visual repository of the various crafts of Kutch. Its primary role as a resource centre for artisan’s doubles up as a public museum and place for demonstrative, hands-on learning.

The predominantly dry landscape of Kutch, its people and cultural nuances formed a rich backdrop to our intervention. There has been a tendency to preserve, emulate and replicate the notion of what may be deemed vernacular, in this case, Kuttchi, or visually seen as belonging to Kutch. Our interactions with the artisans, their craft and their aspirations led us to believe that despite being geographically remote, their vision and outreach had gone beyond the boundaries of the region. The milieu allowed for a wider exploration of the built. Their spirit was an inspiration to create a contemporary environment that reflected their artistic, frugal and industrious attitude.

The site for the LLDC (Living & Learning Design Center) is located in Paddhar village, about 18kms from Bhuj. The 8-acre parcel of land is planted with mango, chickoo and coconut palm trees. There was also a large patch of land that was non-arable due to the presence of subsoil water, a unique characteristic of the site.

The master plan has three main components: the museum, the crafts school and the residential enclaves. The museum block was part of the first phase of work on site. Its strict guidelines for the conservation and preservation of textiles meant that the building had to be inherently thermally stable to rely less on artificial means of conditioning. This concern was followed right through the design of the buildings and became the core of the building design strategy.

The architecture of the museum block is a series of large solid volumes, punctuated by conidial skylights that cut out the elements and the dust. Along with this core, are the ancillary passageways and shaded spaces for craft demonstrations and impromptu workshops that attach to the core as porous appendages, allowing spontaneous and simultaneous experiences.

This archetype for a museum seeks to establish the primacy of place-making over, manneristic form making prevalent in public architecture today. A museum, in this context, is thus a “ place”, to experience, move through and habit informally, making language and information more tactile than textual in nature.

The vocabulary is purposefully simple and contemporary in nature, emblematic of the nature of craft as industry and vice-versa today.

The building plan attempts to reduce thermal gain and creates shaded zones that are inherently cool and can depend on passive cooling to reduce operating costs. The use of cooling pipes (radiant cooling) on terraces is planned as a way of insulating the roof from the heat, to attain stable temperatures throughout the year.

The crafts school is the other significant half of the institution. Working spaces for every art and craft of Kutch makes it the single largest living and working craft environment in Kutch. The architectural plan organizes activities along a central movement spine, reminiscent of the covered ‘suq’ or covered markets of other arid desert regions of the world. It creates a climatically appropriate gesture coupled with sustainable methods of building to define these working areas. The complex interweaving of functions brings about interest and diversity of experience.

The shops are run by the artisans in training, to develop skills aimed at marketing their craft in the right manner and learning to preserve what is essential to the survival of the craft.

On-site housing for the master craftsmen, artisans, visiting academicians and scholars is the third built component. Integrated along with the work environment, yet separate, the housing is designed as a series of modular courts with dwelling units linked by internal streets. Artisans enjoy living and working in the company of their apprentices and colleagues in an atmosphere of creative synergies, mutual admiration and support. Individuals with diverse cultural and social needs, food habits and patterns of life will be residents here.

Places for common dining, recreation and celebration of social events are essential components of the plan. Several unbuilt spaces, planted groves and spaces between buildings become places for interaction, recreation and multiple uses. The three major building components are organized loosely around a generous courtyard that allows people to congregate in large numbers on occasions such as the annual product exhibit fair and even otherwise.

Shrujan is a non-governmental organization working in the field of women’s self-employment programs through the revival and development of traditional embroidery crafts since 1969, based in the Kutch region of Gujarat State in Western India.  Founded by Chanda Shroff this NGO has worked tirelessly in the region.(more on  https://shrujan.org/the-shrujan-story/). This project was funded by grants from the Shrujan Trust.

The economy of means and materials were to be the backbone of this endeavour. Judicious use of materials and sustainable design strategies aimed at thermal comfort was developed and integrated with the design of the campus. Meticulously detailed windows and cut-outs on the west and south allow the winter sun to warm the interiors while keeping out the summer sun. A simple strategy to ensure ventilation without affecting thermal gain.

Lime and fly ash bricks were manufactured on-site using waste carbide lime slurry, sand and fly ash to reduce cost and get the required strength and thermal stability compared to any other material. Lime mortar was prepared on-site by slaking lime in large ponds and grinding it with sand and crushed brick. Gauged lime mortar was used in the masonry work and natural lime plaster using traditional methods was used in three coats in some areas.

Rainwater harvesting tanks were integrated with the design of the foundations to collect about 7 lac litres of rain annually.

A decentralized wastewater treatment system (DEWATS) is designed to handle all the wastewater from the site including the process effluents from the printing and dyeing workshops.

The programme brought in a heightened respect for the ‘work of the hand’ among young designers and artists and cultural exchange between crafts and performing arts of Kutch, the 8 states of the North east of India and Jammu & Kashmir. Over the past 8 years or so, Shrujan has also been engaged in researching the other embroidery communities of Kutch. This research has yielded rare and valuable insights into the communities and their embroidery traditions. Skill development and up-gradation in the younger generation of craftspeople belonging to all the crafts has been a key focus of LLDC in Kutch.

Indigo architects is a collaborative studio practice, headed by Mausami and Uday Andhare, supported by a team of young professionals. We follow an integrated design approach incorporating architectural design, landscape planning and interior design into its fold. The design process seeks to resolve the various paradoxes between client needs and affordability, site conditions and programmatic dictates through intensive analyses, explorations, study models and sketches.