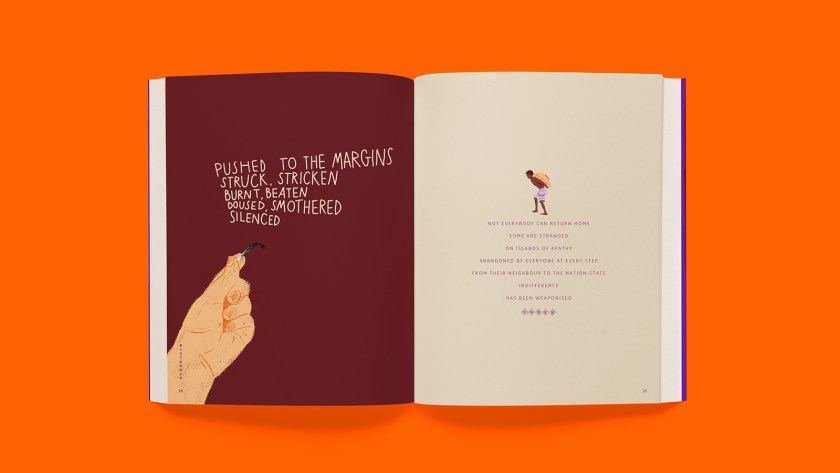 23/01/2022 kokum .co Communication Design, Health and Well Being Comments Off on BYSTANDER

The anthology explores the theme of the “Bystander”, a person who is present at an event or incident but does not take part.

The Bystander Anthology is a feminist project from Kadak Collective that comprises graphic narratives by writers and artists from the Indian subcontinent. The anthology explores the theme of the “Bystander”, a person who is present at an event or incident but does not take part. The anthology was crowdfunded via Kickstarter, through a campaign created by Kadak Collective. It exists in a 256 page printed publication and a small collection of multimedia stories. See more at bystander.kadakcollective.com.

The project is a collaboration of many forces and started as an editorial project on gender and geography. Akhila Krishnan from Kadak Collective spearheaded and laid down the framework for this project, while Aarthi Parthasarathy added the angle of “The Bystander” and the scope of the theme. Mira F Malhotra handled the visual language and description (print and digital) production, and Shreyas R Krishnan created the social media campaign. Gopika Bashi, a gender justice campaigner, and Sabika Abbas Naqvi advised the team on all fronts and shaped the community angle to the project, as Kadak invited approximately 50 artists and contributors to lend their voices to the project. Akhila and Shreyas Krishnan managed the seamless production for the project from start to finish.

The campaign and book were created with several symbols, the first omnipresent one being a vine, based on South Asian textiles. The vine obscures and hides, grows chaotically, whilst also being beautiful to look at, while other symbols of themes lurk in-between, disguising themselves. A grenade as a flower, a fire-arm, a dagger, barbed wire (violence, weapons and warfare) + DNA, animals and birds (the natural living world) + windows and doors- devices by which persons watch through or shut off from the world and happenings they witness or don’t. The book is further divided into sections, as conceptualised by Parthasarathy after the stories came in: Borders (barbed wire), Bonds (windows and doors), Bodies (DNA helix and natural world), Beliefs (three monkeys).

10 co-publishers from different parts of the world who were moved enough by this project to support it in their individual capacity. Read about them here.

After relentless campaigning in a 40 day long Kickstarter, the campaign overshot its goal, with approximately 48,200 GBP pledged by mostly South Asian folks worldwide. Then began the editorial process, where editors from Kadak Collective spoke to the contributors and coordinated the stories that would later become the book/multimedia project.

Artists and writers were selected to form a broad, non-mainstream and likely more realistic idea of the subcontinent. This selection is why you will see viewpoints from specific communities that are not usually represented: disabled, northeast, south, trans folks, Dalit, Adivasi, queer, diaspora, women, religious minorities. As bystanders themselves to mainstream politics and understandings of this part of the world, their stories are powerful yet seldom heard.

We build visual languages that define brands, and craft meaningful images informed by an involved and thorough understanding of content. A small team of graphic designers, we enjoy working closely with musicians, trendsetters, activists, NGOs and game-changing lifestyle brands which speak to niche audiences. Inspired by Indian art history & folk arts to alternative subcultures, we use image-making, in unconventional and challenging ways.